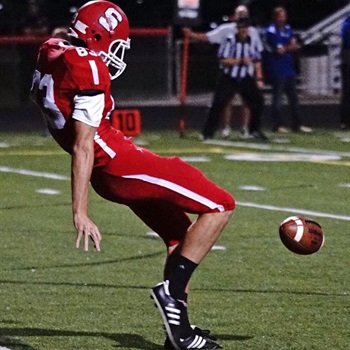 Westerville (OH) South punter Brad Robbins was offered by Michigan and committed to the Wolverines on Wednesday. He chose the Wolverines over offers from Illinois Navy, Nevada, and Rutgers.

Hit the jump for more on Robbins.

Robbins was mentioned just in the past couple weeks as a possible addition when it looked like Michigan wouldn’t be able to reach its reported goal of landing 30-32 commits. In fact, he didn’t receive an offer until National Signing Day, but the coaching staff clearly apprised him of the situation. When a couple players went off the board to other schools, the coaching staff saw they would have room to extend an offer.

I’m admittedly not an expert on punting, kicking, and long snapping, so I generally just look to the specialist-specific recruiting sites for guidance. While 247 Sports ranks him as a 2-star and the #7 punter, a couple kicker-centric sites have him ranked as #1 and #3. Kornblue Kicking gives him a 5-star ranking, which means they think he can start at the FBS level as a true freshman.

Michigan needs an immediate contribution at punter, whether it comes from Robbins, a walk-on, or redshirt freshman Quinn Nordin. Kenny Allen pulled triple duty last year doing punting, placekicking, and kickoffs, so nobody is proven. Even if Robbins ends up in a backup role, he might be able to take some of the weight off the shoulders of Nordin (or a walk-on) in blowouts or certain situations.

Michigan now has 30 commits in the 2017 class, and that seems like where they’ll wrap things up.

You can find highlights here (LINK), but this is the fun highlight I’ll embed: