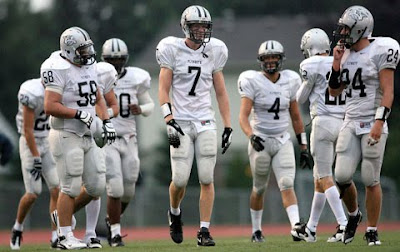 Who cares about Brennen Beyer (#7)? I think #4’s knee is bending the wrong way. Who does he think he is? Joe Theismann?
Plymouth High School (Plymouth, MI) defensive end Brennen Beyer committed to Michigan on Thursday evening. Beyer is a 6’4″, 215 pounder who had offers from Michigan State, Notre Dame, Texas Tech, and UCLA, among others. It seemed as thought Notre Dame was his #2 school, although the race wasn’t very close. He’s the #18 defensive end to Scout and a 4-star prospect on their site; ESPN and Rivals haven’t ranked him at this point.

Beyer grew up a Michigan fan and wanted to jump when the Wolverines were the first program to offer. But he and his parents made a smart, calculated decision to visit some other schools and not make a rash choice. In the end, though, his heart was in Ann Arbor.

Beyer is being recruited to play the Quick end position currently held by Craig Roh. He’s only 215 lbs. right now, but you can see in his legs and torso that he has plenty of room to fill out. He joins a long list of other players who will be vying for playing time in 2011, but ultimately, he’ll likely redshirt as a freshman. I expect him to stay at the Quick end position because he has quite a bit of natural ability as a pass rusher, but he could also play tight end or inside linebacker if the situation calls for it.

STRENGTHS
Beyer has excellent explosion off the ball. He’s tall, long, and has good straight-line speed. He generally has good pad level. Beyer almost always initiates contact and uses his hands well to deflect blockers. He plays with a somewhat reckless manner in which he finds the ball and then goes all-out to chase the play down, even if he’s on the backside; he’s the definition of a high-motor player. For the most part, he diagnoses plays quickly.

WEAKNESSES
As with almost every high school player, he needs to get bigger and stronger; he should be at least 235-240 lbs. before playing in college. Beyer is overaggressive at times and gets himself out of position. Has a tendency to turn his shoulders, allowing blockers to get into his chest. He does not drive his feet when making contact with the ballcarrier; stronger runners will gain extra yards after contact. He needs to refine his pass rushing moves, because he uses virtually no technique aside from his speed. Beyer rarely uses his strength to overpower blockers or deliver a strong initial blow. He also needs to work on his three-point stance; his athleticism could be maximized by getting his butt a little higher and using gravity to get off the line a split second quicker.

OVERALL
In many ways, Beyer reminds me of Craig Roh. Both are long, explosive, and relentless. Both are somewhat susceptible to taking the run game head on. Roh was a little more refined coming out of high school and, despite being a little bigger, has a little more athleticism. Roh will be a junior by the time Beyer arrives on campus and, presumably, he’ll be backed up by a fifth year senior Brandon Herron and a variety of sophomores and redshirt freshmen (Jake Ryan, Davion Rogers, Ken Wilkins, Jordan Paskorz). Barring a rash of injuries, defections, or position changes, Beyer will likely redshirt in 2011 and have a real shot at contributing in 2013 after Roh graduates.