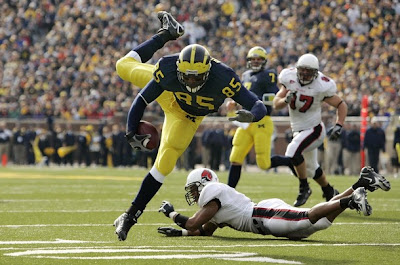 Tight end-turned-defensive end Carson Butler has decided to forego his fifth year at Michigan and see what the NFL has in store for him. My guess? Not much. Butler is a supremely talented athlete who secured the starting tight end job in 2007. He false started and/or held on every other play, but when you’re 6’5″ and fast, you get to play anyway.
According to rumors, Butler butted heads with Rich Rodriguez and his coaching staff. After making a couple nice catches early in the 2008 season, he was relegated to the bench in favor of Mike Massey and true freshman Kevin Koger. He made a midyear switch to defensive end and played significant time against Purdue, even though he continually got pushed backward by the offensive lineman opposite him. After the Ohio State game, internet reports swirled that Carson Butler challenged Rich Rodriguez to a fight on the sideline during the game.
This is probably a win-win-win situation. Michigan’s team won’t be held back by locker room cancers and false start penalties. Rodriguez will have one less headache to worry about. And Carson Butler will avoid being savaged by Mike Barwis’ pack of angry pet wolves.
I would be surprised if an NFL team took a chance on Butler in the draft. He may latch on somewhere as a rookie free agent until he pisses off the coaching staff of whatever practice squad he’s on. Finesse tight ends usually linger toward the top of the depth chart, and Butler isn’t ready to be an NFL starter. Considering his aversion to blocking – which is where many unheralded tight ends have to make their mark – I don’t think he has a future at the next level.