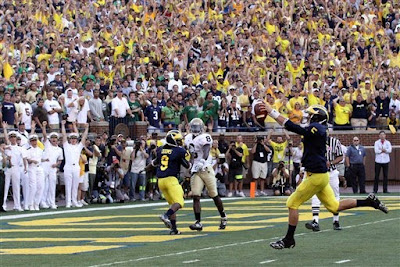 Need I say more?
People on message boards are clamoring to see Denard Robinson. With Mid-American Conference patsy Eastern Michigan University coming up this Saturday, some fans are dying to see the fleet-footed Floridian start or take the majority of snaps against the Eagles.
No.
Tate Forcier is a true freshman. He won the starting job outright. Practice observers said during fall camp that Denard Robinson was catching up to Forcier, but that couldn’t be further from the truth. Forcier has thrown the ball 53 times for five TDs. He’s also run for a little over 100 yards. Meanwhile, Robinson has completed 2/4 passes for 18 yards. He’s just not ready.
If you don’t believe me, review the WMU game. Yes, Denard took his first snap 43 yards for a touchdown, but it was on a broken play on which he fumbled the snap first. That’s great athleticism, but that doesn’t mean he’s ready to win games for you. A good punt returner might have done what Denard did on that play. I wouldn’t trust a good punt returner to take snaps for an entire game in an FBS game.
Meanwhile, each of Robinson’s passes was thrown 90 mph. One completion was on a very nice catch by Kelvin Grady; the other was just a solid throw. His two incompletions were darts, one of which probably should have been intercepted by whoever was covering Greg Mathews. The only detail that saved him from throwing his first interception was the fact that Michigan was playing a MAC team.
I don’t know that I’ve seen much of a difference between Denard Robinson 2009 and Justin Feagin 2008. The coaches didn’t trust Feagin to throw the ball against decent competition, and considering that Denard didn’t throw the ball against Notre Dame, that makes me think Rich Rodriguez has approximately the same confidence in Denard’s throwing and decision-making. If Feagin had played against a team like WMU last year, who knows? Maybe we would have seen him throw a couple passes.
Tate Forcier needs to start the game against EMU. He’s only two games into his college career, and he’s thrown a total of 53 passes. He led Michigan in a great comeback win against Notre Dame, but there are still some things he could improve, particularly his reads on the zone read option. Removing Forcier from the EMU game would stunt his growth, if only for a week. He needs to get ready for the Big Ten season. You can bet that EMU will throw some different looks at him, and it’s better for Forcier to get used to reading different alignments and coverages against a less talented team than seeing a certain blitz for the first time against, I don’t know, Iowa or Penn State.
The reason Michigan fans want Denard to play is simple: Denard is very, very fast. Michigan fans never ask to see the backup unless the starter sucks. The starter has been awesome, so what gives? I don’t see OSU fans clamoring for Joe Bauserman or Notre Dame fans begging for Dayne Crist. When the New Orleans Saints played a cupcake Detroit Lions team this past weekend, I didn’t hear any Saints fans asking to see Mark Brunell so Drew Brees wouldn’t get hurt. Denard hasn’t shown that he can do anything with his arm, but Michigan fans want to see him take a shotgun snap and teleport himself into the end zone. That’s all well and good, and I’d like to see teleportation myself. But no matter who you are, if the opposing team knows all you can do is run from the QB position, they’re going to put eight or nine guys in the box.
Forcier should start the game and take the majority of the snaps. Denard should play intermittently and if Michigan gets a big lead, Rodriguez should let Denard loose and see how much of the offense he can run productively. This quarterback situation should be treated like any other. Michigan shouldn’t weaken its starting quarterback just to strengthen its backup. That makes no sense.