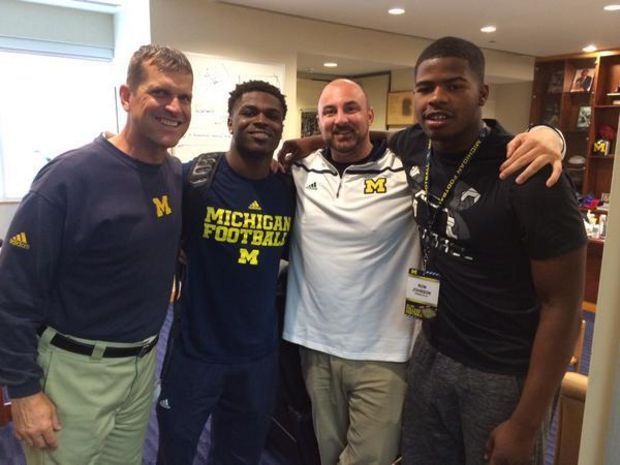 Site note: If you want to create/use an avatar for posting and discussion purposes, check out my forum post on how you can create one (LINK).

Michigan recruiting coordinator Chris Partridge has been named Michigan’s linebacker/special teams coach. After filling in as linebacker coach for Michigan’s bowl preparation (former linebacker coach/defensive coordinator D.J. Durkin left for the Maryland head job), Partridge got the permanent job. He replaces John Baxter, the special teams coach who left for USC after one year in Ann Arbor. Partridge previously spent time coaching defensive line, secondary, and helping with special teams at both Lafayette and The Citadel before returning to the high school ranks.

Meanwhile, new defensive coordinator Don Brown spent the past three seasons coaching linebackers at Boston College. Prior to that, he was coaching cornerbacks. Something may have to give, as Michigan currently has the safeties covered (Greg Jackson), a cornerback coach (Mike Zordich), a linebacker coach (Partridge), and a defensive line coach (Greg Mattison). Perhaps Partridge and Brown will split linebacker duties, with one taking the outside guys and another taking the inside guys. It would be an odd step to replace a full-time special teams coach with a newbie who then has to coach linebackers and special teams. Another option would be to bring in a graduate assistant to help with the linebackers, much like Will Carr (defensive tackles) and Derron Montgomery (wide receivers) have helped Mattison and Jedd Fisch in the past.

This also opens up a spot for a recruiting coordinator. Matt Doherty has a similar role to Partridge’s old spot, and Erik Campbell has been helping out. There have been rumors that Devin Bush, Sr. – currently the coach at Pembroke Pines (FL) Flanagan and the father of early enrollee Devin Bush, Jr. – could come on board in some capacity. Also, Michigan hired Rick Finotti as a football operations guy out of northern Ohio, and he could also step in. However, Michigan has not focused much of its recruiting efforts in Ohio since Jim Harbaugh was hired, so Finotti’s connections may not pay off as well as Partridge’s have in New Jersey.