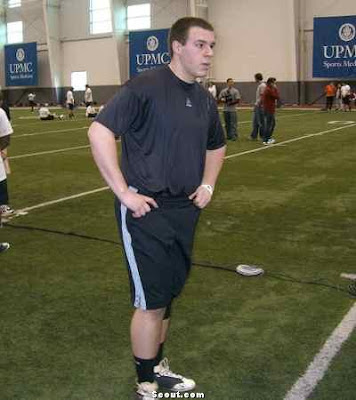 The effects of the BBQ at the Big House this past weekend are starting to show. Not only did Michigan pick up a commitment from offensive lineman Christian Pace on Monday, but linebacker recruit Ken Wilkins has set an announcement date for next Tuesday.
Pace is a 6’4″, 260 lb. interior lineman from Avon Lake, OH. Rivals has him listed as the #5 offensive center and a 3-star prospect. Pace has been a supposed Michigan lean for a while, and the Wolverines beat out Florida State, Illinois, Iowa, and Michigan State, among others. Pace also has a teammate at Avon Lake High named Dan Schneider, a tight end who has earned offers from Colorado, Florida State, and Pitt, among others. Schneider attended the BBQ and though he doesn’t have an offer from Michigan, he could earn one down the road.
Here’s a weird quote from Rivals’ commitment article:
“As for playing time, they’ve got that real good center – David Molk – but they told me both of their guys will be out of there when I am a freshman and it will be open competition.”
This quote doesn’t make sense. At first glance, it looks like the coaches must be recruiting him as a center. But incumbent starter Molk will be a redshirt sophomore in 2009, meaning he’ll only be a redshirt junior when Pace arrives on campus.
That must mean the Wolverines are recruiting him as a guard, right? Starting guard David Moosman is a fifth year senior and . . . wait a minute . . . Steve Schilling will have one year of eligibility remaining when Pace gets to Ann Arbor.
Either the coaches were lying, or they meant there would be an open competition when Pace is a redshirt freshman. The latter makes more sense to me. Both Moosman and Schilling will be gone by then, and players like Ricky Barnum, Rocko Khoury, and Quinton Washington will be vying for the starting guard spots. True freshmen rarely play on the offensive line and if Pace truly is 6’4″, he’s a little bit tall for center. So I’m guessing the coaches are looking at him primarily for guard.
Looking at film, he’s athletic enough for guard. He plays tackle in high school, but many top linemen do because it gives them a chance to collapse one whole side of the line. Pace does an excellent job of finishing his blocks; the running back is sometimes seven or eight yards downfield and Pace is still latched onto his man. When he gets a pancake block, he often just lies on top of his man, which is demoralizing for a defensive player. He drives his legs and doesn’t just use his mass to move smaller defenders.
When releasing to the second level, Pace plays a little high. He can probably outmuscle players on the second level, but the problem lies in a lack of agility when linemen get out in open space and play too high. Playing lower will give him more power, but it will also give him a better opportunity to stay in front of those smaller, quicker linebackers. He also needs to work on lower body strength, as he gets stalemated by smaller players at times. But that will certainly be addressed as his body fills out and he enters a college strength and conditioning program.
Picture via Scout.com