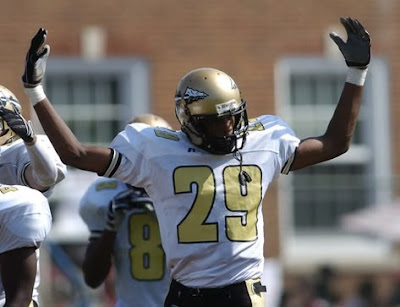 Davion Rogers shares a story about a fishing trip
Davion Rogers, a linebacker from Harding High School in Warren, OH, committed to Michigan yesterday after an official visit. He just recently procured an offer from the Wolverines after having been committed to West Virginia. Rogers’ teammate is D.J. Williamson, a Michigan wide receiver commit.

Rogers is a 3-star linebacker to both Rivals and Scout, ranked as the #26 outside linebacker to Rivals and the #96 player at his position on Scout. Along with being a former Mountaineer commit, Rogers had also been reported to have interest in his Michigan State offer.

Michigan’s coaches recruited Rogers for the Quick end position, currently manned by Craig Roh. When Roh arrived in the summer of 2009, he was 238 lbs. Rogers is currently 6’6″, 210 lbs. and needs to bulk up before he can expect to contribute. Physically, he’s very reminiscent of former Michigan outside linebacker Shawn Crable; Crable was listed at 6’6″, 230 lbs. coming out of high school, but he ended up around 245.

Watching film of him, Rogers has incredible physical talent. The most impressive thing about him is his speed. He’s able to catch up to skill players from behind. His wingspan also helps him latch onto and wrap up players who might be out of a shorter player’s reach. Once he gains strength, that wingspan should also afford him the ability to keep offensive tackles out of his chest.

Unfortunately, one of the reasons that Rogers gets to show off his speed so much is that he tends to take poor pursuit angles. That’s typical for many talented athletes, but it’s something that will have to be corrected. Hopefully, his speed will result in a similar awesome play to Crable running down Michigan State’s A.J. Jimmerson from the opposite side of the field a few years ago. Rogers also tends to reach when tackling. He leaves his feet or stops his feet in order to reach out and tackle, which will be a problem against stronger, faster players.

Rogers is a few years away from contributing. Craig Roh has a similar skill set and his backup, Brandon Herron, offers a different type of skills. It should take a year or two for Rogers to gain enough strength to contribute, and his techniques will have to develop and mature as his strength does. Considering Brandon Herron will be a redshirt junior in 2010, I expect Rogers to redshirt as a freshman and then compete for playing time in 2012 when Roh is a senior and the whole world is wiped off the planet except John Cusack.