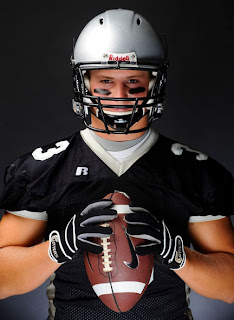 Linebacker Desmond Morgan, from West Ottawa High School in Holland, MI, committed to the Wolverines on Monday after visiting for the “Big Chill” outdoor hockey game at Michigan Stadium.  Morgan is a 6’1″, 225 lb. linebacker and ranked as a 3-star recruit to Rivals, Scout, and ESPN.  He chose Michigan over offers from Akron, Bowling Green, Buffalo, and Northwestern.

As a high schooler, Morgan played inside linebacker on defense and . . . quarterback on offense.  That’s not a typical combination, but he pulled it off.  As I said in some previous comments about Morgan, I have some added respect for recruits who played quarterback in high school.  They typically tend to understand better how the entire team works together within a system, because they spend 50% of their practice time staring down a Cover 3, a Cover 2, seeing where the weaknesses are in zones, seeing how to attack different alignments and coverages, etc.  In addition, teams often put their best athletes at quarterback.  It doesn’t hurt that he has a 3.97 GPA.

As far as his defensive position goes, I fully expect Morgan to play middle linebacker at the next level.  He has the prototypical body type for the position.  He flows well to the ball and keeps his shoulders square to the line of scrimmage.  And when he hits, he puts some force behind it.  You can tell by the way he runs the ball and the way he tackles that he understands leverage and getting underneath his opponent.  He also times his blitzes well and stays under control when attacking.

I understand why he’s a 3-star kid.  He’s not a quick-twitch athlete.  He looks like the type of player who will fill out to be about 245 lbs., plug his gap, make a bunch of tackles, contribute as a blocker or wedge buster on special teams, and just be a solid overall player.  I would expect that he will redshirt in 2011 and spend another year or so on the bench before really pushing for playing time (Kenny Demens runs out of eligibility after 2012).  I’m not expecting Morgan to win the Butkus Award, but I’m looking forward to him putting on a winged helmet.  Between Morgan and fellow Class of 2011 defender Kellen Jones, the Wolverines are putting together a solid crew of linebackers.