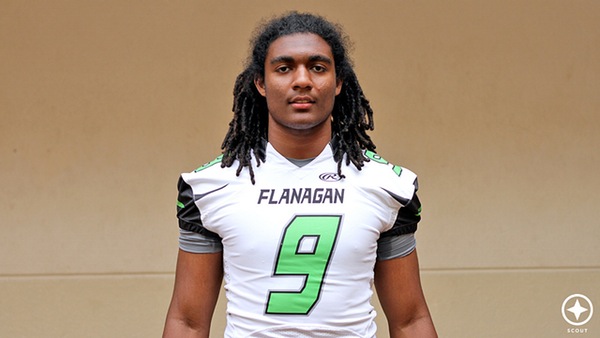 Gil committed to Miami in January, but he immediately said that he still wanted to check out other schools who might have interest in him. Michigan started pursuing him in March, and he seemed excited by the offer. As the weeks went along, he showed more and more interest in the Wolverines. He and two of his teammates (2016 safety Josh Metellus, who committed to Michigan earlier this week, and linebacker Devin Bush, Jr.) visited Ann Arbor last weekend, and that sealed the deal. He went public with his announcement Friday morning.

Gil is solidly built in the upper and lower body. He plays some safety and some linebacker for his high school team. As a linebacker, he does a good job of taking on and shocking blockers with his hands, which frees him up to make plays in the run game or coming up on short passes. He is a very physical player and will stick his nose in there against guys who are bigger than him. He also likes to lay out players coming across the middle, and there are some hits which might get him in trouble at the higher levels of football. He reads plays quickly and takes good angles to the football, which is something I have noticed about the Flanagan kids, so they appear to be well coached defensively. (According to Maxpreps, Flanagan went 12-1 in 2014 and allowed point totals of 0, 0, 2, 3, 6, 6, 8, 10, 10, 16, 21, 21, and 28 for an average of 10.1 points allowed/game. They also beat fellow commit Rashad Weaver’s Cooper City squad by a score of 42-2.)

On the negative side, I have questions about where Gil will play in college. I believe he is too stiff in the hips and too slow to trust with deep coverage, so he may be limited to playing strong safety in the box. At roughly 6’0″ and already supposedly over 200 lbs., he may end up as a linebacker, too. The interceptions shown on his highlights are not particularly athletic ones, and his touchdown return on one shows a guy who lacks burst.

I am reminded of 2009 recruit Isaiah Bell, who ended up at linebacker/defensive end before transferring to Lake Erie College, a D-II program in Ohio. I don’t necessarily think Gil will end up being 252 lbs. like Bell, but I do think Bell was a smoother athlete coming out of high school (check out Bell’s highlights HERE). I just can’t buy into Gil as a quick-twitch athlete on the back end. He looks like a limited safety, a small-ish outside linebacker, and/or a special teams guy. The coaches might have to chisel out a role or certain packages for him so he doesn’t get exposed.

Michigan now has 17 commitments in the 2016 class. If Gil is a safety, he’s Michigan’s second at the position, joining Metellus. If he’s a linebacker, he’s either the third or the fourth, depending on whether David Reese is a fullback or not; the other two are Dele’ Harding and Dytarious Johnson. The other offered 2016 teammate, Bush Jr., tweeted out today that he would not be making his commitment at January’s Under Armour All-American Game, which seems to imply that a decision is close at hand. The odds are strongly in favor of him choosing the Wolverines as well.

TTB Rating: 58. This is exactly the rating I gave Delonte Hollowell, and that seems to have been roughly accurate (ratings explanation).