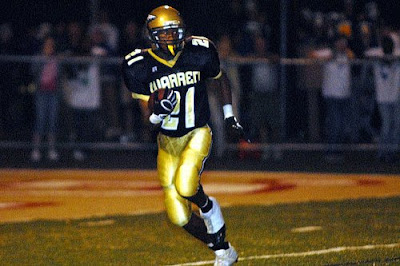 D.J. Williamson, a wide receiver from Harding High School in Warren, Ohio, committed to Michigan on Friday morning. He had been saying for a while that there was a good chance he’d commit at Junior Day. He wasn’t lying.

Williamson isn’t ranked by Scout or in the Rivals 250, so it’s unclear exactly where he fits by their evaluations. It’s hard to believe that a kid who’s 6’1″, 172 lbs., and very fast will be anything less than a 3-star. Then again, it’s hard to believe that a kid who only had 30 catches for 365 yards and 3 TD’s will be more than a 3-star. So I’m guessing he’ll be a 3-star recruit, at least until his senior season starts.

Harding High School produces a lot of quality talent, including former Wolverines Carl Diggs, Prescott Burgess, and Mario Manningham. Williamson grew up a Michigan fan and should stick with his commitment through thick and thin.

If he reminds me of any Michigan player from the last decade, it would be Carl Tabb. He has good straight-line speed but isn’t very elusive. He has the speed to play slot receiver and the size to play outside receiver; he could also play cornerback, so he offers some flexibility. He will most likely be a mid-level recruit. I don’t expect him to ever be a star, but he could be a serviceable player at Michigan.

This gives Michigan four wide receivers in the class of 2010. With only two wide receivers graduating this coming year (Greg Mathews and Laterryal Savoy), Rodriguez is doing more than replenishing the position. He’s trying to stockpile skill position players. On top of that, two of these receivers – Williamson and Jerald Robinson – have the ability to play in the defensive backfield. I don’t expect all four of these receivers to remain at that position for their entire careers, and I would not be surprised to see one of these guys either decommit or be informed that he’ll be playing defense instead.