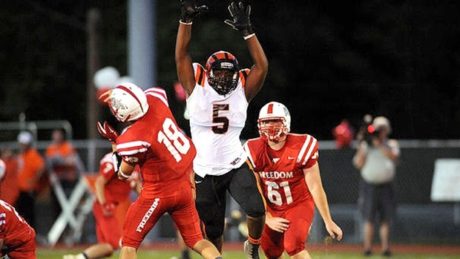 Hit the jump for more on Jeter’s recruitment.

Jeter had eliminated Michigan even prior to choosing Notre Dame a few weeks ago. Shortly before the short-lived commitment, he announced that he would once again be considering the Wolverines and scheduled an official visit. Then he pulled the trigger for Notre Dame, which lasted a couple weeks, decommitted, scheduled an official to Ann Arbor for this past weekend’s game against Illinois, and committed to Michigan on Sunday. It’s been a whirlwind month for him, and with recruitments like these, it’s hard to believe the whirlwind is completely finished.

Jeter has a large frame and good wingspan. He has been listed anywhere between 250 and 300 lbs. over the past couple years, and Hudl currently lists him at 6’5″, 285 lbs., which looks to be pretty accurate. He uses his wingspan to cover a lot of space when it comes to wrapping up quarterbacks and ball carriers. He can be a very physical tackler and has the quickness to make a big impact when he arrives. When he wants to, he can fire off the ball low and with a good burst, making him an intriguing prospect as a tackle/end tweener.

I don’t see a ton of consistency in Jeter’s junior film. He uses his hands well at times, and then he gets sloppy. He gets good extension on one play and then keeps his hands outside on the next. He fires off the ball one play, and then he hops out of his stance on the next. He gets both hands on the tackle at times, and then he just steps outside and waits for the play to run its course. Whether it’s conditioning or coaching or the general malaise that comes along with being an elite high school football player, he doesn’t show a great motor. His competition is generally pretty poor, and he sometimes seems loathe to physically punish the guys trying to block him. He saves the punishment for ball carriers, but he’ll need to be more physical at the point of attack at the next level.

Overall, with the way we’ve seen Michigan develop defensive linemen over the past several years, there’s no reason to expect that Jeter will fail to progress when he gets to campus. My guess is that improved strength and conditioning, along with rotation to keep him fresh, will allow him to play more consistently. He needs a lot of work on technique, but two brothers have made it to Nebraska and Pitt as pretty good basketball players, so it’s a family that presumably responds well to coaching and improvement. I see him being a 3-technique tackle at the next level, because he lacks the speed to be an edge rusher and plays a little too high for a regular nose tackle. But depending on how his body develops, he could play any of those three positions.

Michigan’s 2017 class is now back up to 17 commitments. Michigan needs defensive tackles in this class, and Jeter fills a spot that was once occupied by Aubrey Solomon. He joins DE Luiji Vilain, DE Corey Malone-Hatcher, DT Phillip Paea, and DT James Hudson on the defensive line, though the latter two could end up on the offensive line. According to the 2016 scholarship count, the class should reach at least 23 (LINK).

Jeter would be the first Michigan player from Beaver Falls since QB/DE William Ross in the late 1960s/early 1970s. The last player to come from Pennsylvania was 2016 signee Khaleke Hudson.