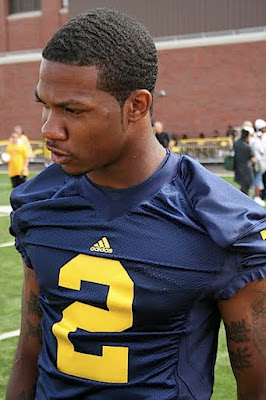 The Ex-Wolverine Encyclopedia is really interesting to me. I’m not sure why that is because ex-wolverines don’t impact Michigan Football whatsoever, and in many cases, the players have spurned Michigan in one way or the other. On the other hand, I find the case study aspect interesting, and I like to know whether or not the players would have made an impact at Michigan if they had stayed.
Here’s an update on a few players. For a complete ex-wolverine list, go here. As always, please email/comment with any info/updates.
Justin Turner
Turner reportedly enrolled at Notre Dame College of Ohio after leaving West Virginia during the 2010 season, which Justin was scheduled to sit out due to transfer rules. But an assistant coach at the junior college said enrollment never happened: “we thought for sure he was going to enroll, but then he dropped off the map.” The coach also heard that Turner may attend “a college in California” but wasn’t sure about the credibility of what he had heard.
Demar Dorsey
After being denied admission to Michigan, Dorsey enrolled in Grand Rapids Community College. Coach Andrews, the school’s defensive coordinator, said that Dorsey chose GRCC because he knew several of the players on the team who are from Florida and, as a child, Demar even played little league football with a couple of his GRCC teammates. Despite a rocky start, Coach Andrews said that Dorsey has attended all of the team’s voluntary workouts this summer and is slotted to see action as a defensive back and kick returner this fall, but he doesn’t expect Dorsey to see any action on the offensive side of the ball.
Also of note, Coach Andrews recently spoke with Chris Singletary, who indicated that Michigan would still be interested in Dorsey if he continues to demonstrate positive behavior and invest in academics. For reasons unknown to Coach Andrews, Oregon is Dorsey’s current “leader” although Dorsey hasn’t had any recent contact with the University. “Maybe it’s because they were just in National Championship game; maybe it’s because he likes their uniforms,” Coach Andrews speculated half-jokingly.
Conelius Jones
After failing to academically qualify at Michigan, Cornelius enrolled at Marshall University, a former member of the MAC and a current member of Conference USA. A Marshall blog posted an article that says Jones had more academic problems at the University, but the writer then added an emboldened “Edit” bit at the end of the page that says Conelius just wanted to be closer to home. Either way, it doesn’t look like Jones will be continuing with his football career.
Justin Boren
Perhaps my least liked ex-wolverine, Boren signed on to play for the Baltimore Ravens as an undrafted free agent immediately following the NFL lockout.
Tate Forcier
Although most people seem to be disinterested with the Forcier saga, I find it fascinating for a couple reasons. Firstly, had he kept his academic house in order, I would have enjoyed seeing the role he might have played in the Borges offense. Secondly — the first half of 2010.
So if you don’t already know the story, Forcier reportedly committed to play for Miami (FL) but backed out because the school was too far from home. He then showed interest in Hawaii–which is a similar distance away from his San Diego home–but was denied enrollment due to issues with his Michigan transcript. Here’s to hoping he lands on his feet.