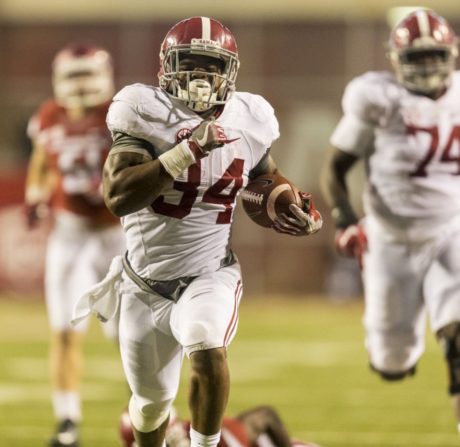 Ross Douglas, LB (Rutgers): Douglas made 7 tackles in a 35-14 win over Illinois.

Wyatt Shallman, DE (Ohio): Shallman made 5 tackles and 0.5 tackles for loss in a 48-30 win over Bowling Green State University.

Chris Clark, TE (Pittsburgh): Clark made 2 catches for 20 yards in the 35-17 loss to North Carolina State.

A.J. Dillon, RB (Boston College): Dillon had a huge breakout game with 39 carries for 272 yards and 4 touchdowns in a 45-42 upset win over Louisville.

Damien Harris, RB (Alabama): Harris ran 9 times for 125 yards and 2 touchdowns in a 41-9 win over Arkansas. Seven games into the season, he’s averaging 9.2 yards/carry and has 9 touchdowns, while averaging under 10 carries per game.

Rashad Weaver, DE (Pittsburgh): Weaver made 2 tackles and 1 tackle for loss in a 35-17 loss to North Carolina State.

D.J. Durkin, Head Coach (Maryland): Durkin and the Terrapins lost to Northwestern, 37-21. Maryland is 3-3 this year.

Brady Hoke, Defensive Line Coach (Tennessee): Rumors have begin to pick up that head coach Butch Jones might be on his way out of town after a 15-9 loss to South Carolina. And who on Tennessee’s staff would be a prime candidate to take over an interim head coaching job? Well, that would be one Brady Hoke, the former head coach of Michigan (and Ball State and San Diego State).

Roy Manning, Outside Linebackers Coach (Washington State): Manning and his Washington State crew followed an upset of USC with a terrible 37-3 loss to Cal.