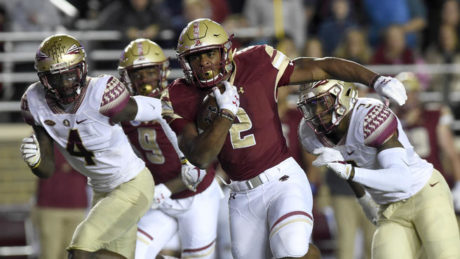 Ross Douglas, LB (Rutgers): Douglas made 1 pass breakup in the 35-14 loss to Michigan.

Logan Tuley-Tillman, OT (UTEP): Tuley-Tillman has been the starting left tackle for the UTEP Miners. Unfortunately for them, they’re 0-8. Along with Baylor and Georgia Southern, they’re the only winless teams in the Football Bowl Subdivision. No teams went winless in 2016, but Kansas and UCF both achieved that feat in 2015.

Antwaine Richardson, CB (Maryland): Richardson made 2 tackles in the Terrapins’ 42-39 win over Indiana.

Rashad Weaver, DE (Pittsburgh): Weaver made 4 tackles and 1 sack in the 31-14 victory over Virginia.

Roy Manning, Outside Linebackers Coach (Washington State): Manning and the Cougars fell to 7-2 after a 58-37 loss to Rich Rodriguez and Arizona.

Rich Rodriguez, Head Coach (Arizona): The Wildcats improved to 6-2 with a 58-37 lambasting of #15 Washington State. Don’t look now, but Rodriguez appears to be saving his job after suffering through a 3-9 season last year. Breakout quarterback Khalil Tate ran 13 times for 146 yards and 1 touchdown, while also completing 10/17 passes for 275 yards, 2 touchdowns, and 1 interception. Running back J.J. Taylor also averaged over 10 yards/carry with 14 rushes for 153 yards and 2 touchdowns.