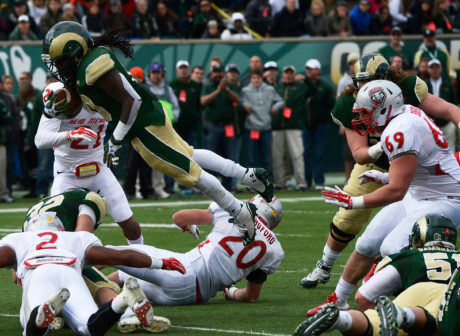 Former S Josh Furman: Furman made 2 tackles in Oklahoma State’s 49-28 loss to #6 Baylor. After starting off 5-1, the Cowboys have now lost five in a row and will be fighting for bowl eligibility next week against Oklahoma.

Former RB Thomas Rawls: Rawls had 19 carries for 76 yards and 2 catches for 10 yards in Central Michigan’s 32-20 loss to Western Michigan.

Former head coach Rich Rodriguez: Rodriguez and his Arizona Wildcats beat #20 Utah by a score of 42-10. That’s the same Utah team that beat Michigan 26-10. I wonder how badly Arizona would beat Michigan right now. Anyway, running back Nick Wilson had 20 carries for 218 yards and 3 touchdowns. The team is 9-2 with a game next week against a pretty good Arizona State team.

Former S Ray Vinopal: In Pitt’s 30-7 win over Syracuse, Vinopal had 5 tackles, 1 tackle for loss, 2 forced fumbles, and 1 pass breakup. Pitt will be fighting for bowl eligibility next week against Miami.