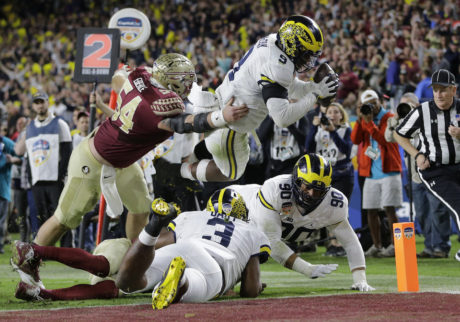 Jake Butt is probably worth 1 point, too. When you find out you’ll be without a Heisman finalist for the bowl game, at least you can rely on the Best Tight End in the Country. Unless he suffers the first significant injury of his career in the second quarter. After the game, Jim Harbaugh said he thought it was an MCL or ACL injury. Every team suffers injuries, but Florida State’s most significant injuries (Derwin James, Jesus Wilson, etc.) happened months ago. It’s much tougher to prepare someone when the starter gets injured the day before the game or in the second quarter.

Jabrill Peppers’s Michigan career was disappointing(ly short if it’s over). You get the #3 recruit in the country in 2014, and you think he’s going to be a high-impact player from day one. He didn’t do much his first three games and then hurt his knee, ending his freshman season. He played 12 games as a redshirt freshman, then missed the bowl game. He played 12 games as a redshirt sophomore, then missed the bowl game. That’s 27 games out of a possible 38 and 0 bowl games. Michigan didn’t need him to beat Florida last year, but they needed him to beat Florida State this year. One punt return touchdown, one interception, 10 career pass breakups from the #1 cornerback in his class, etc. Don’t get me wrong – Peppers did some amazing things in a Michigan uniform over these past two seasons. But he has only played in 71% of the possible games, and now he’s probably headed for the NFL.

I need to look at the 92-yarder again. Somebody else might beat me to this, but I’m going to have to take a look back at the 92-yard touchdown pass that “beat” Jourdan Lewis. Defensive coordinator Don Brown gave free safety Dymonte Thomas a hard time when he came off the field, so maybe it was Thomas’s fault, but the defense appeared to be faulty either way. Some postulated that Michigan was in Cover 2, but strong safety Delano Hill was sitting in an underneath zone. Others said Thomas needed to midpoint the two verticals (a go route for outside receiver Nyqwan Murray, a post route from the slot guy), but you can’t have one guy playing deep while everyone else plays underneath zone. There is no defense that exists that leaves a free safety and everyone else underneath. After looking at it a few times last night, I think it was either a combination coverage (since Stribling was playing man on the opposite side), or it was a coverage that not all of Michigan’s defenders checked into. Either way, it was an embarrassing effort, and I wasn’t impressed with the pursuit by Lewis or Thomas after the catch, either.

Wilton Speight is Denard Robinson right now. I took criticism several years ago when I talked about how Robinson was “not a good quarterback” because of his inability to throw the football. I said that even during the 2010 season, when he completed a respectable 62.5% of his passes for 18 touchdowns and 11 interceptions. Guess what Speight’s completion percentage was going into the Orange Bowl? It was 62.5%. (You cheated, Steve. I know you did.) Robinson completed a bunch of his passes on short hitches and bubble screens, but anytime he had to throw the ball downfield, he couldn’t make the reads and didn’t have the accuracy to get it there. Speight is in the exact same boat, except instead of bubble screens, he’s hitting tight ends and fullbacks in the flat. Instead of hitches, he’s hitting tight ends and receivers running 3-yard crossing routes. Speight missed numerous open receivers downfield, including some absolutely terrible throws. Jehu Chesson was wide open in the endzone on a throwback and couldn’t even get a fingernail on the ball. On the final series, Speight badly overthrew Kekoa Crawford for an incompletion, and the final pass was 8″ over the head of Chesson, resulting in a pick. Speight looked rattled and befuddled throughout the game, and that’s how he has looked in most big games this year. And just like with Robinson in 2010, Michigan can’t win football games against elite teams without a solid passing threat from the quarterback.

The offensive line played terribly. Freshman left guard Ben Bredeson got abused in the first half. He couldn’t handle FSU’s quickness, nor could he identify whom to block. He let Matthew Thomas stop De’Veon Smith in the backfield when Michigan had a 1st-and-Goal from the 2-yard line, and he was too late to handle FSU’s interior line stunts. It’s not all on Bredeson, though. Fifth year senior right guard Kyle Kalis couldn’t handle the defensive line, either, and backup tight end Ian Bunting got run around by Josh Sweat. Speight was under pressure constantly, and it seemed like at least one assignment was missed on every single play. Even when Speight wasn’t facing immediate pressure, he had happy feet and was backing away from throws rather than stepping into them. He made some nice throws while taking hits early in the season, but maybe the shoulder injury caused him to be gun shy, because he flinched away and tried to throw off his back foot way too often in this game.

De’Veon Smith had one nice run but it’s time for a new era. Smith had a nice 13-yard run that ended with him leaping over Florida State cornerback Marquez White, but he once again struggled against an elite team with 2.3 yards/carry (16 carries for 36 yards). Meanwhile, backup Chris Evans had 8 carries for 49 yards, including the go-ahead 30-yard touchdown with 1:57 remaining in the game. We knew the offensive line would struggle, but Smith can’t create for himself.

When will Michigan have a Dalvin Cook again? It’s been too long since Michigan had an elite talent at running back. I know Cook is a special talent (20 carries, 145 yards, 1 TD; 3 catches, 62 yards) and every team wants someone like him, but there are chances for success behind Michigan’s offensive line. This isn’t the 2013 unit that got crushed on every single snap by even middling defenses. We saw one of those available opportunities when Evans busted the 30-yard touchdown. Speed kills. Playing someone like Smith on most downs is a recipe for failure. I’ve said it over and over and over again, and I will go to my grave begging for running backs that have big-play ability. Cook is a speedy back who’s also elusive and has some power. Those backs don’t grow on trees, but they can be found. And when you get them on your roster, you have to play them.

Jourdan Lewis is a great player, but he picked a bad time to play his worst game in two years. I posted this on Twitter last night and got some flak, but that’s how I felt and feel. Florida State quarterback Deondre Francois was only 9/27, but he had 222 yards, 2 TDs, and 1 INT. A few of those completions came against Lewis, including the game-winning touchdown. He was beaten over the top a couple times, and seemed to be a little lackadaisical when chasing down a couple plays. It wasn’t a terrible game (he did have a nice PBU), but he’s capable of playing better.

Mike McCray scored a touchdown, so that was nice. He was beaten on a long pass by Dalvin Cook, but that’s not on him. You can’t match up a 248 lb. inside linebacker on the nation’s best running back split out wide and expect the linebacker to win. He did the best he could and made the tackle immediately after Cook caught it. Later in the game, McCray did a great job of rolling with Francois and made an interception that he returned 14 yards for a touchdown.

Michigan finished 1-3 in their final four games. For all the bluster about how this was a national championship-caliber team and the best squad in the Big Ten, this team went 1-3 down the stretch against Iowa (L), Indiana (W), Ohio State (L), and Florida State (L). Ohio State and Florida State are powerful teams with tons of talent, but that’s not the case with Iowa or Indiana, the latter of which still gave Michigan trouble. Sure, those three losses were by a total of 5 points (1 to Iowa, 3 to OSU, 1 to FSU), but that’s a disappointing finish for an “elite” team. The truth is that Michigan has a mediocre offensive line and a mediocre quarterback. An elite defense can only take you so far. People say “Defense wins championships” and use the 2000-2001 Baltimore Ravens as an example, but at least they had Priest Holmes and Jamal Lewis at running back, two of the elite running backs of their time, and Hall of Fame lineman Jonathan Ogden. Michigan has De’Veon Smith and Erik Magnuson.