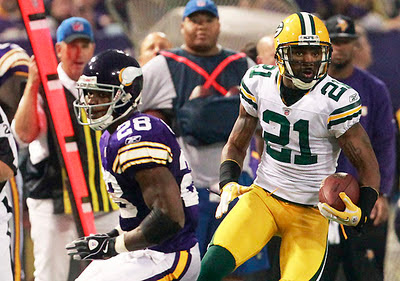 A commenter on the Packers’ official website thinks that “Charles Woodson is a stud.” I tend to agree. During Sunday’s contest between the Packers and the Vikings, the 35-year-old Woodson intercepted two passes in the third quarter, which resulted in two Green Bay field goals. Those six points ended up being the difference in the game as the Packers downed the Vikings by a score of 33-27 to remain the undefeated leaders of the NFC North. Woodson also had four tackles and 3 pass defenses in the Victory.
The Packers played “99% man coverage” against rookie QB Christian Ponder, but Woodson was still able to use his understanding of the game to undercut passes. “You have your back to the ball a lot, your back to the quarterback a lot, and you just try to put yourself in position and get your head around when you think the ball is coming and make a play on it…I really feel like I should have had four today,” said Woodson. The only two active players who have more picks than Woodson (52) are Darren Sharper (63) and Ed Reed (56).
Perhaps most impressive, Woodson taught children all across America the valuable lesson that no one is perfect when he gave up a 24 yard touchdown pass to WR Jenkins mid-way through the fourth quarter. Wow, he plays football like a badass and cares about Children, too.
Honorable Mention: LaMarr Woodley recorded seven tackles, 2 TFLs and 2 sacks—one of which led to a safety—as his team the Pittsburgh Steelers won a 32-20 contest over Arizona.