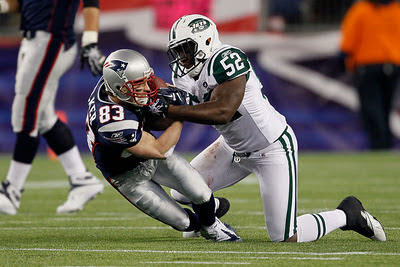 The New York Jets have a damn good defense, and David Harris is a damn good New York Jets defender. Four years removed from trading up in the second round of the draft to acquire Harris, the Jets must be satisfied with the return on their investment: the 6-2, 250 lb MIKE linebacker has started every game in which he has participated dating back to his rookie season.
On Sunday, Harris helped his team defeat the Buffalo Bills and move into a three-way tie for first place in the AFC East by recording 5 tackles, a pass break-up, a QB hurry and a diving interception. Harris picked off the pass (highlight here) with just under five minutes remaining in the second quarter, allowing the Jets to maintain their 3-0 lead headed into halftime. The Bills, who were averaging 30.1 points per game entering the contest, were far less successful against Harris and his defense in their 27-11 defeat. “It’s huge to be back in the mix,” said Harris. “That was a huge test for us…”
Honorable Mention: Manningham took the lead for the Giants with 4 minutes remaining against the Patriots when he caught a 10-yard score. But then Tom Brady did what Tom Brady does, putting together a two minute comeback touchdown drive. Not to be outdone, Eli Manning did the Patriots wrong–again (see Super Bowl 42). In the game, Manningham scored a touchdown and gained 33 receiving yards. Tom Brady put up 342 passing yards and 2 touchdowns, but turned over the football three times. So I’ll go with Manningham for Honorable Mention, especially sine his team won, 24-20.