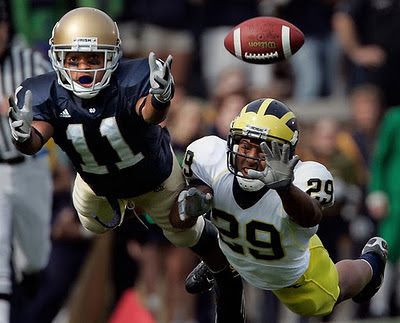 Former Michigan Wolverine and first-round draft pick, Leon Hall, starts at cornerback for the Cincinnati Bengals. Shockingly, they have the NFL’s number 2 ranked defense, giving up only 278 YPG. That’s second only to the Pittsburgh Steelers and just in front of the Baltimore Ravens. On Sunday, Hall recorded 5 tackles, two pass deflections and a nice-looking interception in a 27-17 victory over the Indianapolis Colts. Hall’s interception came with only 2:36 seconds remaining in the fourth quarter, taking away any hopes of a Colts comeback. The interception was the first of the season for the Bengals’ defense and the 19th of Hall’s relatively young career. Fellow ex-Wolverine CB, Morgan Trent, also saw playing time as a member of the Bengals’ dominating defense of doom on Sunday, but he did not register on the stat sheet. Cincinnati holds a 4-2 record heading into their bye week.
Honorable Mention: The Houston Texans lost to the Baltimore Ravens on Sunday by a score of 29-14, but Texans defensive lineman Tim Jamison lit up the stat sheet on a single play when he “strip-sacked” Joe Flacco and then recovered the fumble. Watch video of the play here. He had two tackles, two TFLs, two sacks, a forced fumble and a fumble recovery on the day.