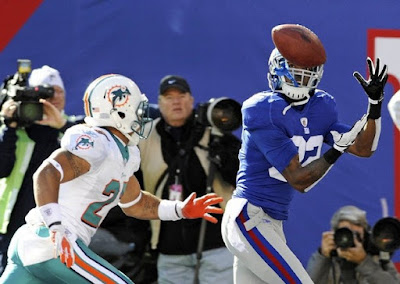 Seventeen catches for 227 yards with zero touchdowns was Manningham’s stat line through 6 games entering Sunday’s contest against the Miami Dolphins. That’s pretty underwhelming — especially given the lofty pre-season expectations surrounding Manningham. But Mario put his abilities on display this week, catching 7 passes for 63 yards and a touchdown in his team’s 20-17 comeback victory over the winless Miami Dolphins. Manningham got the best of a rookie cornerback for much of the game, beating him on a 7 yard fade route to score his first touchdown of the season with only :08 seconds remaining in the first half. With a record of 5-2, Manningham’s team the New York Giants are comfortable leaders in the NFC East; all other teams in the division hold a record of 3-4.

Honorable Mention: Tom Brady went 24-for-35 (69% completion percentage) with 2 touchdowns and zero interceptions this week but threw for only 198 yards—his lowest total of the season—as the Patriots lost by a score of 25-17 to the Pittsburgh Steelers. The game ended with a Brady fumble that went through the Patriots’ end zone for a safety.