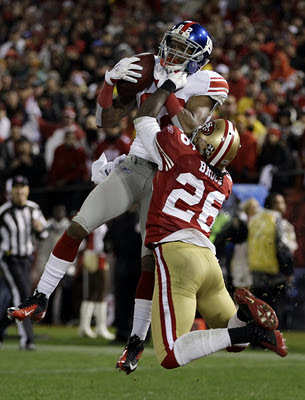 Mario Manningham caught a touchdown pass for the third straight week, this time on a 17-yard reception in traffic on third-and-15. Coach Tom Coughlin called it an “incredible football play,” and the score gave the Giants a 17-14 lead with only 8:41 remaining, eventually leading to their 20-17 NFC Championship game victory over the 49ers. Manningham lined up as the outside receiver on the play, ran up field, slanted in and shielded the over-the-top defensive back with his body as he leaped to haul in the touchdown pass. You could try to visualize that, or you could just watch it here.
Honorable Mention: Whether or not you still hold a grudge towards Jim Harbaugh, one thing is undeniable: he can coach. This year he took a hapless 6-10 San Francisco team – and a franchise that hadn’t had a winning season in eight years – all the way to the NFC Championship game, coming up only three points shy of a Super Bowl birth. As stated in the title of an interesting thread on the MGoBoard, congrats to Jim Harbaugh.
Miscellaneous: Carson Butler returns to the New England Patriots’ practice squad, making eight former Michigan athletes who are represented in Super Bowl XLVI, which is among the most of any college. Scot Loeffler, quarterback at Michigan from 1993-1996 and quarterbacks coach for Michigan from 2002-2007, was hired as Auburn’s offensive coordinator, giving Michigan fans “a strange reason to root for Auburn.”