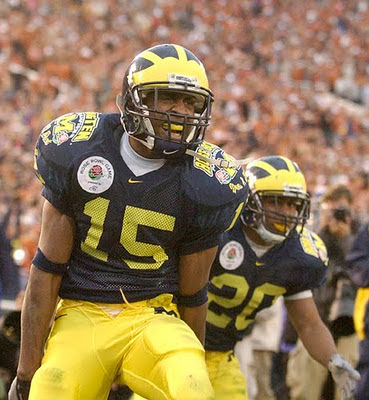 Fifteen days ago, I selected Steve Breaston as the week 3 Former Michigan Athlete of the Week; however, I also made it clear that he was chosen mostly by default, saying “I hope Breaston’s numbers are a bit more impressive the next time he wins….”
Two weeks later, it is exceedingly apparent that Breaston reads this blog and is highly motivated by my powerful words. Breaston caught two touchdown passes on Sunday, one of which was an 11 yard grab that gave his team a four point lead with only 5:15 remaining in the game. The Chiefs held on for the 28-24 victory, and Breaston finished with four catches for 50 yards as well as the aforementioned 2 touchdowns. He is also playing a “bigger part in [the] Chiefs’ offense,” which should earn him a reprieve from Coach Haley’s constant screaming and terrible temper. Breaston has played both in the slot and on the outside at his wide receiver position this year.
Honorable Mention: LaMarr Woodley terrorized the Tennessee Titans to the tune of 2 sacks, 3 tackles, an interception and a deflected pass as his team the Pittsburgh Steelers went on to win by a score of 38-17. The interception was the fourth of LaMarr’s career, which is alright for a 265 lb. 26 year-old outside linebacker.
Also worth mentioning, Philadelphia Eagle Jason Avant snared 9 catches for 139 yards but with 0 touchdowns in a 31-24 loss to the Bills.