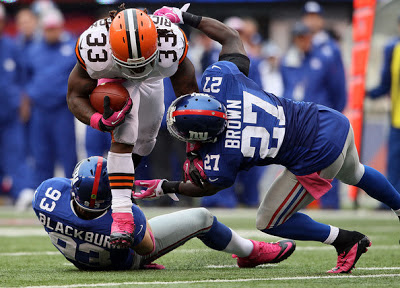 Stevie Brown wins this award for the second time in three weeks, and this time I’m not being generous.

Brown started Sunday’s game against the Cleveland Browns, picked off a pass, returned it 46 yards, recovered a fumble on special teams, made three tackles, and deflected a pass as his New York Giants went on to win, 41-27.  Brown has been seeing more playing time due to perfectly staggered suspensions by the Giants’ starting safeties for performance enhancing drugs.  Stevie’s been making the most of that opportunity, and his play has even been causing head coach Tom Coughlin to say nice things about him like “he’s speedy,” and a “strong guy that can run fast.”  Getting Coughlin to say nice things is not easy to do.  The Giants are now 3-2.

Honorable mention:  In a 31-21 victory over Peyton Manning and the Denver Broncos, Tom Brady passed Brett Farve to move into third place for most consecutive games with a touchdown pass.  With 38 straight games with at least one scoring toss, he still trails Drew Brees (48) and Jonny Unitas (47).  Brady threw for 223 yards this week and completed 74% of his passes.