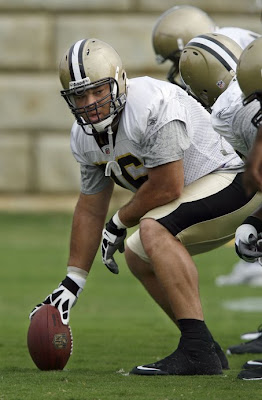 New Orleans Saints center Jonathan Goodwin
On Sunday night, Goodwin helped the Saints beat the Indianapolis Colts in the Super Bowl, 31-17. Wide receiver Adrian Arrington was on the Saints practice squad and former Michigan offensive coordinator Terry Malone is the Saints tight ends coach. I feel sorry for Malone, though, because that means he has to work with Jeremy Shockey every day.

Honorable mention: Former Wolverine running back Tyrone Wheatley had been the running backs coach at Eastern Michigan this past season, but he’s headed to Syracuse to take the same position there. This is a step up from a bad Mid-American Conference team to a bad Big East team.