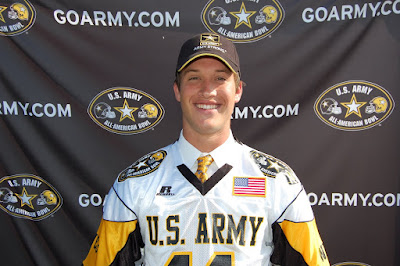 Interestingly, Matt Wile is the lowest rated member of the 2011 class, yet he is the most likely of the 19 freshman to make an immediate impact this season. This paradox centers around Wile’s position as a kicker: recruiting services tend to view the position as having less value.
But don’t tell that to Michigan fans, who have recently been reminded–the hard way–of the value provided by a competent kicker. Now, after two years of woeful performance at the position, all of Wolverine nation crosses its collective fingers, holds its collective breath and prays to the heavens that Matt Wile can come in as a true freshman and produce points*.
That’s a lot of pressure.
But by all indications, Matt is a confident young man with an even temperament. He is also doing everything in his power to prepare for his pressure packed moments at the Big House.

“I’m trying to get myself in some sorts of pressure situations. It’s really hard to do when it’s just myself, but one of the things I’ll do is I’ll set up balls in a certain location and I’ll give myself 10 seconds to run from the sideline to kick a field goal.”

To further prepare, Matt utilized the assistance of a kicking coach, Lance Ortega of the San Diego School of Football, to get himself in optimal form for the 2011 season. The duo worked exceptionally hard just prior to Wile’s move to Ann Arbor, spending hours addressing kicking mechanics, drills and habits. Matt is kind enough to spare us the intricate details of his kicking procedures, but he gives us a short overview of his game time routine.

“I go out on the field and get set-up; I take three steps back, two steps over. And before I give my head-nod to the holder to let him know that I’m ready, I always take one really deep breath [to] calm my nerves. And when the ball’s snapped, it usually ends up happening where I don’t hear anything anymore and all I focus on is the ball. And it usually goes through.”

My favorite part of the quote is where Matt says that the ball usually goes through the uprights–yeah, that part was awesome. And it’s also true. In fact, Matt’s field goal average over his junior and senior seasons was a cool 76%. So Matt is accustomed to success and sees no reason why things should change once he starts kicking at Michigan Stadium. Actually, Wile’s ahead of the game since he’s already made a field goal at the Big House.


“From [the ages of] 6 -12, I used to travel with my dad and go to football games. And I was 10 or 12 and San Diego State was playing Michigan. It was a couple hours before the game; there weren’t too many people on the field, so I asked my dad if I could go kick a field goal, and he said ‘sure’…and I ended up kicking a 30 yard field goal in my tennis shoes…right down the middle.”

Despite relocating to a school over two thousand miles away, Matt should feel right at home at Michigan. Not only is he a 5th generation Michigan student, but his father–who attended medical school at Michigan and works as an M.D. for the San Diego State University football team–plans to fly in to see all of his games(!). If that weren’t enough, Wile’s relationship with Coach Hoke dates back several years.

Academics were another primary reason that Matt chose Michigan, and although many recruits say that, it appears to be especially true for Matt, who is a 4.0 student with plans to enroll in the College of Engineering. It sure doesn’t sound like Wile is adverse to pressure, whether it’s on the football field or in the classroom.
*…and effectively step in as punter during the first four games