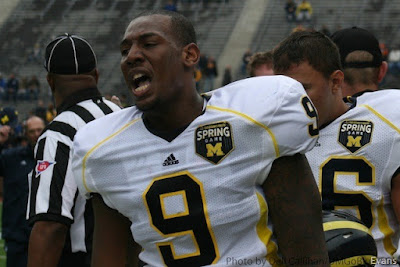 I didn’t get overly excited when I heard that linebacker Marell Evans was transferring back to Michigan after a one year stint at FCS school Hampton University. Granted, I knew Marell was re-entering the program as an experienced player at a position of need, but Evans was an unheralded recruit who only saw limited playing time on the ’08 and ’09 squads, which were among the worst defenses in Michigan history. So getting back a role player from those teams didn’t exactly send shivers of excitement down my spine. Then, after checking out Marell’s stats at Hampton only to discover that he barely saw the field, I completely discounted any chance of a contribution from him this year.
With my expectations of Evans similar to those of a preferred walk-on, I was initially teriffied to hear that he was running with the ones during spring ball and, by many people’s predictions, including our own Magnus/Thunder’s, likely to start at linebacker in the fall. What would that say about the other linebackers?
But things don’t look so grim after speaking with Hampton’s Director of Player Development, Coach Ray Lewis*. For starters, Marell had a very good reason for not seeing much/any playing time at the FCS school.

“That [lack of playing time] was definitely due to injury…he ended up re-injuring his foot. I think he actually first got injured up there [at Michigan] before he even came down [to Hampton], so he re-aggravated the injury…it was tough on him, as it would be for any young man.”

Although it’s never enjoyable to hear about a person’s misfortune, it’s a relief to confirm that Marell’s lack of playing time at Hampton was due to lingering injury rather than poor performance. Evans has now been on the mend for nearly an entire year, and he has earned a reputation as a hard worker. MGoBlue lists his height and weight at 6’3”, 225 lbs., and Evans certainly appears to be in good condition and physically ready to make an impact based on what we saw in the spring. Now, over four years removed from his unimpressive recruiting ratings, Evans is garnering favorable evaluations from people who know what they’re talking about.

“He can go. I mean, I’ve played in the NFL; I’ve played Division 1 ball, and when he’s healthy, he can really go…he’s full of athletic ability…I’m sure if given an opportunity and he’s healthy–and he’s a leadership type of guy–I’m sure he’ll do well.”

Maybe I was foolish for dismissing Evans so quickly. He’s no longer an unheralded underclassman playing in a disastrously managed defense; he’s a RS Senior with an excellent work ethic performing under the supervision of Greg Mattison. It’s also clear that Evans brings more to the table than just his playing ability. In fact, Coach Lewis used the word “leadership” to describe Evans no less than 4 times during our short conversation.
With only one year of eligibility remaining, Evans didn’t transfer back to Michigan for the 2011 season to ride the bench. Expect Evans to see a lot more playing time this year with Michigan than he did during his tenure at Hampton.
* Not “that” Ray Lewis, obviously.