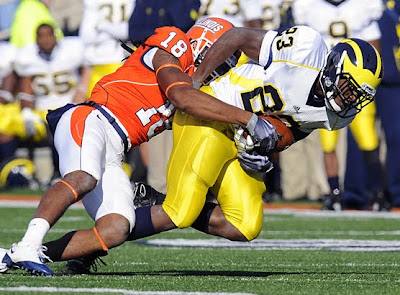 Carlos Brown taken down on first contact? Inconceivable!
Nope…wait a minute…yeah, that’s conceivable.
This was a day that will go down in history as . . . a loss to Illinois.

What I learned from Saturday was that Rich Rodriguez is not the savior of the Michigan program. He is not a genius who can make lemonade out of . . . I don’t know . . . used bicycle tires. He is a football coach who has huge flaws, especially when his team has huge flaws itself.

Illinois was a 1-win football team before Saturday, and that win didn’t even come against an FBS school. They beat the winningest program in college football history, and it wasn’t even close. Michigan’s inexperienced and untalented defense gave up 500 yards total, 377 of which came on the ground. Illinois had not one 100-yard rusher, but two (running backs Micheal Leshoure and Jason Ford) . . . and that’s not counting the 97 yards rushing from their nearly-benched starting quarterback, Juice Williams.

In last week’s game against Penn State, the offense seemed to blame. They consistently failed to give Michigan’s defense a chance. This week both sides of the ball seem to have regressed from earlier in the year. Michigan continues to turn the ball over on offense (3 fumbles) while failing to get turnovers on defense (uhhh . . . 0 fumbles, 0 interceptions). Prior to Saturday’s game, Michigan was 105th in the country. I’m assuming they’re even lower now, although I refuse to look up the stats.

I have to admit that I turned off the game with a few minutes left in the third quarter. I’m usually very calm when watching games on TV, but when free safety Mike Williams lost contain on Juice Williams for about the tenth time on the zone read option, I screamed “Stop doing that!” at the TV. I figured that meant I had had enough, so I shut it off. Mike Williams goes full speed all the time. Unfortunately, he’s often aimed in the wrong direction, despite racking up 16 tackles. Other leading tacklers this year include walk-on safety Jordan Kovacs and walk-on linebacker Kevin Leach, so when safeties and/or slow, undersized quasi-linebackers are notching the majority of your takedowns, something is wrong.

Offensive game ball goes to…Roy Roundtree? Sure. I guess. I don’t know. The offense only mustered one touchdown and two field goals against a bad defense. Choices are slim.

Let’s see less of this guy on offense…Carlos Brown. I can’t believe Rich Rodriguez left Brown in on the goal line. That was the most ridiculous coaching decision from yesterday. Brown is fast, but he hasn’t broken a tackle since that one time in his freshman year when he was playing Madden and hit the truck stick. If Minor is healthy enough to come in on fourth down, he’s healthy enough to come in on first down. And if he’s not? Put Moundros in at fullback and Kevin Grady at tailback. Hell, put John McColgan in at fullback with Grady at tailback. Put Vincent Smith or Michael Shaw at tailback. Brown pussy-footed his way into the hole on 3rd down (maybe 2nd down) and I let out a loud sigh. That whole set of downs was asinine.

Let’s see less of this guy on defense…Michael Williams. I’m sorry for predicting that he would/should start at safety prior to the season. I thought he was better than this. He’s not. He was single-handedly responsible for Juice Williams’s rushing TD and about 50 more of Juice’s yards. My high schoolers can defend the zone read option better than he did. Put Troy Woolfolk back at strong safety, move Kovacs to free safety, and plug J.T. Floyd back in at cornerback. I’d rather have a bad cornerback than a bad safety.