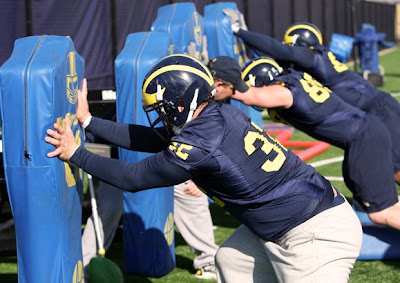 Spring practice started on Saturday, and reports from that practice indicate that all hell has broken loose on the defensive side of the ball. Players are moving all over the place in Greg Robinson’s defense. Some of these moves are immediately good. Some are head-scratchers.
One big rumor is that Steve Brown is moving to linebacker. He’s still listed as a safety on the roster, but he’s bulked up to 215 pounds (he’s been around 205 in previous years). He’s supposedly working out at SAM linebacker. Although he’s a bit undersized for a SAM, he’s good in run support, a good blitzer, and would probably be better in pass coverage than most linebackers. Since he hasn’t been a very good safety, I would put this move in the “good” category, if it’s true.
In position drills, freshman early enrollee Brandin Hawthorne was working out with the safeties. The spring roster listed him at 195, but eyewitnesses have said he looks like he’s well over 200 pounds now, perhaps in the 215 lb. range. From watching his high school film, I don’t think he’d make a good safety. And considering that our linebacker depth isn’t…well…deep, then this would seem curious. Of course, Mike Jones and Isaiah Bell might move from safety to linebacker, so the effect on the actual numbers might be negligible. Also…
Anthony Lalota was seen working with the linebackers. As pointed out a couple days ago, Lalota is apparently 6’4″ and 235 lbs. instead of 6’6″, 260, so his size doesn’t necessarily preclude him from being a linebacker. But considering the Wolverines’ serious lack of depth on the defensive line, my guess is that Lalota might be working out to play the “spinner” (Robinson’s hybrid DE/OLB position) or they might want him to continue working on his agility in open space, since that’s one of his weaknesses coming out of high school.
Also, Vince Helmuth is now a defensive tackle and there’s photographic evidence to support Rodriguez’s claim that he’s a little heavy.