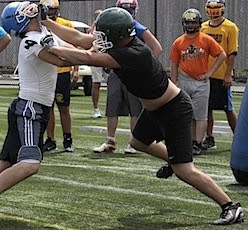 On Sunday evening, Traverse City, MI, offensive tackle prospect Jake Fisher pledged his football services to the Wolverines. Fisher is a 6’7″, 260 lb. lineman who has been playing tight end in high school. While he has the skills, hands, and athleticism to play tight end at the FBS level, he’s headed for a position change.

Scout has him ranked as a 4-star and the #25 offensive tackle in the country. Rivals ranks him as a 3-star. It’s unclear how accurate those rankings are, since the recruiting services are trying to project a tight end to a completely different position. However, Fisher’s highlight video is a series of pancake blocks with an occasional sprinkling of Fisher running past linebackers and defensive backs to catch a few passes. Hooray for pancakes.

I like Fisher. He’s a superb athlete for an offensive tackle, moves very well, and for being 6’7″, he stays really low. This is not a player whose pad level needs to be questioned. He fits perfectly into Rich Rodriguez’s zone blocking system and should be able to latch onto defensive ends and linebackers.

As with any high school lineman, he needs to add some weight. A redshirt is virtually guaranteed in 2011, and by then, both Perry Dorrestein and Mark Huyge will have graduated. Redshirt juniors Taylor Lewan and Michael Schofield will be the likely starters at tackle for 2012 and 2013. But that should leave an opening for Fisher to fight for a starting position in 2014 and 2015, likely at left tackle.

Welcome to the Wolverines, Jake.