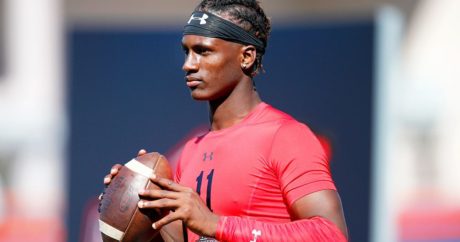 Olympia (FL) Olympia quarterback Joe Milton committed to Michigan on Sunday. He picked the Wolverines over offers from Florida, Georgia, LSU, and Miami, among others.

Hit the jump for more on Milton’s commitment.

When Milton was offered by Michigan, he was considered to be a strong Florida lean. He took a visit to Michigan for the spring game in mid-April, and I heard varied reports afterward. One report said Michigan’s coaching staff gave more attention to Milton than Dorian Thompson-Robinson, the supposed #1 target at the position; the other report said that Michigan’s coaching staff purposefully kept the two quarterbacks separate on their visit, to prevent one from sullying the experience for the other. Every report, though, said Michigan was extremely impressed with Milton and vice versa. Shortly after the visit, it became a “when, not if” situation in regard to Milton committing. One pull for him was that his cousin, Anquan Boldin, played wide receiver for Jim Harbaugh with the San Francisco 49ers. I put my 247 Crystal Ball on Michigan in the meantime, and it finally came to fruition after a little less than a month.

I wrote a scouting report on Michigan’s quarterback targets back in March (LINK). You can see that I ranked Milton #6 of the offered prospects, but keep in mind that Jim Harbaugh has better taste in quarterbacks than the good ol’ days of Al Borges. I still think Milton has a great deal of potential, but he’s not as polished as several of the other guys on the list. I made the comparison – and others have run with it – that Milton looks like an approximation of Devin Gardner. I think Gardner was a better overall athlete – after all, he started at wide receiver for a bit – but Milton offers some ability as a runner and has a stronger arm.

Milton will enter college with a roster presumed to include Wilton Speight (RS Sr.), Brandon Peters (RS So.), and Dylan McCaffrey (RS Fr.). Speight could very well have two years of starting under his belt, and Peters has been pushing from behind. That means Milton should be able to redshirt as a freshman, and then the battle will be on with Peters and McCaffrey for the starting gig in 2019. The Wolverines are also looking to add a second quarterback in the 2018 class, and there’s a good possibility that it will be Tyler Shough, who plans to visit next weekend.