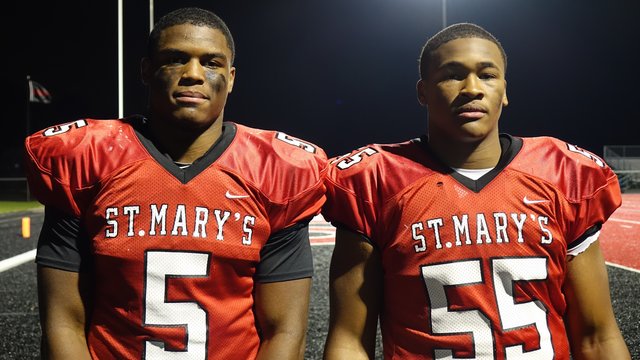 Orchard Lake (MI) St. Mary’s linebacker Joshua Ross committed to Michigan this morning. He chose the Wolverines over offers from Notre Dame, Ohio State, and Oklahoma, among others.

Hit the jump for more on Ross’s commitment.

Here’s what I had to say about Ross back in February:

Strengths: I didn’t think so before his junior year, but Joshua seems almost like an exact clone of his older brother, James, who just finished his linebacker career at Michigan. Both players play(ed) exactly how you would want a high school linebacker to play. Joshua is very disciplined and makes reads quickly. He plays downhill in the run game, and he does a nice job of shocking releasing offensive linemen or sidestepping them with deft handwork. He times blitzes well based upon the quarterback’s cadence, and he slices through running lanes when he sees them. When he arrives at the ball carrier, he’s a solid tackler who drives his feet very well through contact. He has decent speed. I think Joshua has a step up on his brother in pass drop awareness, and he does a good job sinking underneath routes.

Weaknesses: James was listed at about the same size coming out of high school, and that’s not very big for a Big Ten inside linebacker. The concern on my end is that linebackers this size can get swallowed up by linemen at times, and they don’t have enough mass to be a factor if they’re fighting off a blocker while trying to bring down a ball carrier. Offenses could target him in man coverage because of his lack of size and athleticism, but inside linebackers aren’t known for their man coverage prowess.

I had Ross as the #4 uncommitted in-state prospect, and that was before Ann Arbor (MI) Pioneer linebacker Antjuan Simmons committed to Ohio State. As almost an exact clone of his brother’s playing style, I hesitate to project greatness for him when James was just a so-so Big Ten linebacker. However, he may be a bit larger, especially in light of James’s pro day height measurement of a shade over 5’10” (LINK). Joshua Ross will enter the program in 2017 when Michigan should have at least one entrenched starter at inside linebacker, and I would guess that he either redshirts or spends a year on special teams duty exclusively before getting a chance to contribute, probably at WILL. I do not see him as the type of immediate-impact guy to step in immediately and play, but he should be a solid player who plays quite a bit as an upperclassman.

Ross is the first commit from St. Mary’s since his brother picked the Wolverines in the class of 2012. Michigan has also offered WR K.J. Hamler in the 2017 class, and other potential prospects to watch are CB Richard Bowens III, DT Ralph Holley Jr., and LB Dwayne Chapman. Ross is the first linebacker in a class that should end up with at least a few at the position, and he’s the third in-state prospect, joining TE Carter Dunaway and and OT Ja’Raymond Hall.

TTB Rating: Ratings for 2017 players will be released as soon as I re-rank the 2016 class