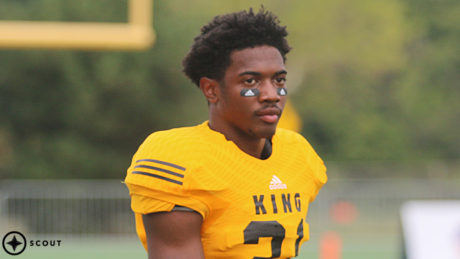 Hill is 5’10”, 172 lbs. Playing receiver as a senior in 2015, he caught 33 passes for 786 yards and 9 touchdowns; he also made 12 pass breakups (note: I don’t have great faith in the accuracy of Detroit PSL stats sometimes). He was a U.S. Army All-American and named the Army Defensive Back of the Year, a national award.

Hill started his career at Detroit (MI) Cass Tech, where he played from his freshman through his junior years. He decided to transfer to King after his junior season. Hill was an early offer by the Wolverines, and it was expected that he would follow his older brother, safety Delano Hill, to Ann Arbor. Hill surprised a lot of people with a commitment to PSU last summer, and he remained committed to the Nittany Lions through November. For the final couple months of his commitment there, though, he was visiting Michigan frequently and giving off vibes that he would not end up signing with Penn State. Michigan State recently picked up a commitment from teammate and friend Donnie Corley at the USAAA game, and the Spartans gave Hill something to think about over the past few weeks. In the end, though, the chance to play with his brother for one season won out.

Hill has decent size for a cornerback. He is a little on the thin side, but 5’10” is decent enough size to contend with taller receivers while also having a low enough center of gravity to change direction well. One of the best aspects of Hill’s game is his ability to flip his hips to turn and run with receivers. You won’t see many cornerbacks with quicker hips. He also has good makeup speed and spatial awareness. He understands how to stay on top of a receiver and how to find the football in the air. Once he gets the ball in his hands, Hill is slippery and quick with good breakaway speed.

On the negative side, Hill does not appear to have a great deal of experience playing press man coverage. Whether by scheme or personal choice, he plays a lot of off man coverage, so being physical at the line of scrimmage is going to be an adjustment for him; he also needs to be careful about using his hands too much as he carries receivers vertically. I mentioned above that he is thin, and he does not have many highlights that show tackling prowess, so that may be an issue. I would like to see him improve his ball security, too, as he carries the ball loosely and away from his body. The knock on Hill early in his career was that he looked great at camps and running around on the field, but he did not make a lot of plays. Although that seemed to change as a senior at King, that will be something to keep an eye on when he faces elite competition in the Big Ten.

Overall, this is an excellent pickup for Michigan. My concerns about Hill’s lack of physicality are mitigated by the fact that Hill is a very good athlete who should be able to make up for some of his shortcomings with his speed, change-of-direction ability, and field awareness. Size is a bit of a concern if he can’t learn to play more physically against bigger receivers, but if that becomes a problem, Michigan does have some more physical corners to play against those bigger players. Some people have been quick to compare Hill to Jourdan Lewis, but I think Lewis is/was a notch above Hill as an athlete and a bit more fiery as a competitor.

Hill is the second cornerback in Michigan’s 2016 class, joining David Long, Jr. There may not be a ton of opportunities to play during the upcoming season, as Michigan returns its top three corners from last season. However, there may be spot duties available, and those two could be your starters in 2017. It would be a good idea to redshirt at least one of them, but that kind of restraint doesn’t always occur. Hill needs more physical development than Long, so he would be my preference for a redshirt.

Michigan has not fared well in recent years at Detroit (MI) King, so this is a step in the right direction with recruitment from that program. There are some out there who believe King’s coaches are biased toward other schools (particularly Michigan State), and there’s a good chance that Hill would have signed with MSU if not for the presence of Delano at Michigan. Michigan did well at King in the 1990s and early 2000s, pulling in players like Clarence Thompson, Ed Davis, and Ernest Shazor, but the last scholarship players to come from King were Larry Harrison in 2002 and Dennis Norfleet in 2012. Michigan has also offered 2017 cornerback Ambry Thomas, but he recently expressed some sourness about Michigan pulling scholarships from a few 2016 recruits, so Michigan needs to mend some fences there if they want to reel in Thomas.