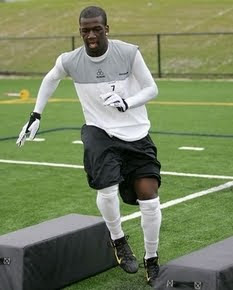 You don’t seem very high (or at least high as many Michigan fanatics) on
DeAnthony Arnett. Any particular reasons why?

There are a few reasons why I’m not particularly high on Arnett, although there’s a lot of personal opinion involved.

First of all, I think he’s a good player. I can’t argue that he’s not. He has some talent.

However, many people in Michigan think he could be a make-or-break type of recruit for Rich Rodriguez, and I don’t see that. He’s an outside receiver and Rich Rodriguez puts an emphasis on getting the ball to his quarterback, his running backs, and his slot receivers. On a team that lacks big-play speed at the outside receiver position (except junior Darryl Stonum), Michigan just finished a recruiting cycle in which they secured commitments from two slow-ish receivers (Jeremy Jackson and Ricardo Miller) and another who isn’t exactly a blazer (Jerald Robinson). Furthermore, Michigan recently added 6’4″ Shawn Conway for the class of 2011. So if Rodriguez is intent on bringing in a bunch of tall receivers with mediocre speed (all of whom earned early offers and committed early in the process, so you know Rodriguez really wanted them), why would a 5’11” receiver be a necessity?

Furthermore, I’m not sold on Arnett’s elusiveness. He does a good job of adjusting to the ball in the air, but he’s not exactly a huge home run threat with the ball in his hands. He cuts once and goes, usually only to be caught after another few yards. Can he get open, catch the ball, and gain a few yards after the catch? Sure. Is he the reincarnation of, say, Desean Jackson? No.

Also, I’m not a fan of what I’ve seen from Arnett in the media. This is where the biggest slice of personal opinion shows itself, but he seems like a bit of a prima donna in the making. I like my players sans ego, thank you very much. Every high school star believes he’s a notch above the rest, but Arnett seems to lack the humility that I’ve seen a few recent beloved Michigan commits show. There’s a reason Ricardo Miller and Devin Gardner have endeared themselves to Michigan fans so quickly; we like blue-collar athletes with good-natured competitiveness. And there’s a reason some Michigan fans (including myself) were upset when Boubacar Cissoko waved demonstratively against Notre Dame, despite the fact that he was beaten repeatedly.

I don’t think Arnett will be a bad player. He has above average skills for a college recruit. But I don’t necessarily want him to be a Wolverine, and I certainly don’t think his commitment would make or break this recruiting class. I will be neither surprised nor dismayed when he signs elsewhere next February.