My understanding is the he DC ran the 3-4 at Baltimore and I’m concerned what this means for Roh.  He doesn’t seem suited to play LB or DE in that system. Is he strictly a one-gap lineman and if so, how do you see him being used by the staff?

First of all, I think Roh is one of the top two defensive players on the roster (with Mike Martin).  He’s 6’5″, 250+ pounds, he’s strong, he can cover a little bit, he’s pretty quick, and he’s aggressive.  So I don’t blame you for being concerned about how he will be used.

Luckily, I think new defensive coordinator Greg Mattison will put Roh in a position to achieve success this coming season.  In my opinion, the old coaching staff was almost criminally negligent in their use of Roh last season.  As a true freshman in 2009, Roh split time with Brandon Herron and notched 7.5 tackles for loss and 2 sacks.  As a full-time starter in 2010, Roh inreased his total tackles by only six (37 to 43) but his tackles for loss dropped to 5.5 and he had a whopping 1/2 sack.  That’s why I was so convinced that the spring 2010 practice rumors were erroneous or overblown that Michigan would be using a 3-3-5.  Sure enough, Michigan tried to play Roh as an outside stacked linebacker, which was a failure.  Rumors popped up that Craig and his father, Fred, approached the coaching staff about using Roh appropriately . . . or running the risk of seeing him transfer.  Almost immediately afterward, we saw Roh playing defensive end again.  I can’t vouch for the validity of those rumors, but generally, where there’s smoke there’s fire.

As for Michigan’s defense in 2011, recruits have reported that Brady Hoke has been relaying messages about running a 4-3.  Obviously, things could change or be misinterpreted, but that’s the word on the street.  On the other hand, Mattison did indeed run a version of a 3-4 this past season with the Baltimore Ravens, and I have a hard time believing that he would change schemes at the snap of a finger.  On the other other hand, someone with Mattison’s age and experience probably knows the ins and outs of both systems.

Really, it would be nothing more than a guess for me to say what type of defense Michigan will run in 2011.  There seems to be evidence for both.  But Roh has the size and skill set to play weakside defensive end in a 4-3 (Tim Jamison was 6’3″, 263 as a senior) or outside linebacker in a 3-4 (Terrell Suggs is 6’3″, 260).  My guess is that the defense will be a hybrid type of 3-4/4-3 in which we’ll see Roh deployed like he was in 2009, back when Greg Robinson had some semblance of a clue what he was doing with the defense (remember when Roh looked promising and Steve Brown had such a solid season?  You know, before Rodriguez forced the 3-3-5 on him?).  Once in awhile, Roh will drop back into the flat or pick up a running back in man coverage.  Once in awhile, Roh will stand up and blitz the interior of the line.  Most of the time, he’ll rush the passer.

I was wrong last year when I said that Michigan would probably run a 4-2-5, but after the defensive performance of 2010, I’m not convinced I was wrong that Michigan should have run a 4-2-5.  It’s not that the 3-3-5 can’t be successful in the Big Ten, but that assumes that the linebackers can be competent.  Obi Ezeh was a disappointment, Mouton was off-and-on, Roh was misused, and by the end of the season, only Mouton remained in the same spot (Ezeh was benched for Kenny Demens, and Roh was put at defensive end).  Rodriguez, Robinson, and the other defensive assistants had no clue how to work together and employ their personnel, and they were sent packing because of it.

I still believe in Roh’s talent, and sadly, a 3-3-5 is just about the only defense where he can’t fit somewhere.  I think 2010 was a bit of an aberration in Roh’s maturation, and we’ll see an explosive pass rusher and stellar athlete wearing #88 once again, rather than this: 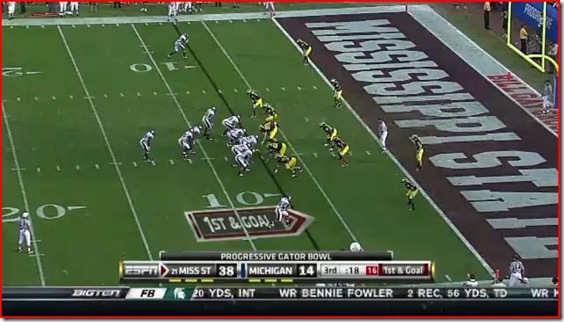