Being fairly new to paying attention to recruiting, what can you tell me about the correlation between football rich recruiting areas and the connections of Michigan assistant coaches and scouts? It seems obvious someone on the staff knows Florida.

Coaches are assigned specific recruiting areas, especially talent-rich states. For example, Tony Gibson is a born-and-bred West Virginian, which is in close proximity to Pennsylvania and Ohio. Therefore, Gibson’s recruiting base centers in those three states. It’s important for coaches to make personal connections with high school coaches, staff, and kids, so typically a coach will maintain the same recruiting area from year to year, even when they change jobs, if possible. If a Big Ten coach who recruits Illinois gets hired in the SEC, his most fruitful recruiting ground could very well be Illinois. But there’s no need to heavily recruit the state of Utah, for example, so a coach who’s assigned to California would likely handle any stray talents who find themselves lost in the middle of the Beehive State.

If you visit Mgoblue.com’s coaches page, you can find biographical information for each coach. Michigan’s ace Florida recruiter, quarterbacks coach Rod Smith, is from West Virginia, but he spent six years coaching at South Florida. The go-to guy for Texas and Louisiana recruits, running backs coach Fred Jackson, was born in Baton Rouge, LA, and attended Jackson State. Bruce Tall is a native Ohioan. The coaches are from various places and have coached at myriad institutions, but it’s a pretty good assumption that they tend to recruit near their hometowns or where they’ve spent considerable time. For example, it’s a little bit odd that Greg Frey recruits Illinois, since he’s from Florida, played at Florida State, and coached at places like South Florida and West Virginia; he must have drawn the short end of the stick, and it may not be a coincidence that no Illinois players have committed to Michigan since Frey’s arrival.

Below is my best effort – okay, maybe not my best effort, but I don’t get paid for this – to define assigned geographic recruiting areas. (The state of Michigan is recruited by almost all the coaches.) 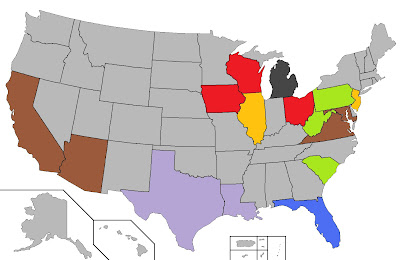 The map is a very general outline of the coaches’ recruiting areas and should not be taken as gospel. For example, several coaches recruit in Florida and, as mentioned above, Tony Gibson recruits some in Ohio. It would be impossible to create a map that specifically defines each coach’s recruiting area, in part because sometimes personalities or positions are matched with recruits. For example, Florida juggernaut Rod Smith was the main recruiter for quarterback Tate Forcier, who hails from Whale’s Vagina, California.