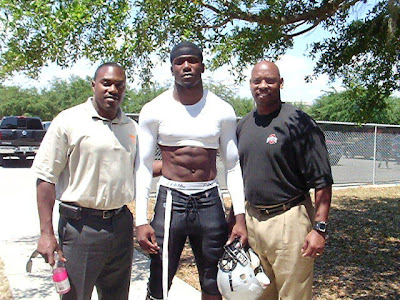 Finally. Highly touted safety Marvin Robinson, from Lake Region High School in Eagle Lake, FL, has publicly committed to Michigan. I say “finally” not because he should have committed sooner – I fully believe recruits should commit on their own time table – but because he’s been rumored to be close to committing several times and didn’t pull the trigger until today. The story goes that he committed silently to Michigan on his visit for the 2008 Michigan State game, but he didn’t want to go public with it because his high school coach is a big Buckeye supporter. Rumors say that the coach promised to bench Robinson if he committed to the Wolverines, but that story seems ridiculous.

Regardless, Robinson is the ninth player to commit to Michigan in the 2010 recruiting class – and the best, at least according to Rivals, which ranks him #99 overall. He also plans to enroll in January, meaning his prison abs (see above) will be even more impressive, what with Mike Barwis’s magic concoction of chocolate milk and wolf blood.

If you want a rundown of Robinson’s accomplishments and other people’s scouting reports, feel free to visit MGoBlog. Brian has a nice write-up and, as far as I know, is a full-time blogger and therefore has the time and inclination to do a great amount of research.

However, Brian @ MGoBlog seems to think that Robinson will end up at linebacker. I think otherwise. Regardless of what I heard when Robinson was a sophomore (that he’s a 6’3″, 220 lb. man-child), he is listed at 6’1″ and 190 lbs. And while he still has over a year before he first steps on the field for Michigan, it’s no guarantee that he’ll be big enough to be a linebacker. Even if he packs on twenty pounds by then, he’ll still be small-ish. By comparison, safety-turned-linebacker Jonas Mouton is currently 218 lbs. Witness Brandin Hawthorne as a counterpoint to my argument, but I still think Robinson is a safety. Here’s why:

Michigan’s safety position has been a black hole for years and years. The Wolverines have had adequate players there, but spectacular play has been hard to find. Robinson could help to change that. He has incredible ball skills for a safety and has the instincts to make up for other players’ mistakes. And while he doesn’t hit like Craig Loston, he is a sure tackler. Frankly, I don’t care if our safeties lay people out – I just want them to be able to take a man down in the open field. And according to Robinson, he’s being recruited as a free safety, so there’s that.

By the time Robinson gets here, these are the players who will be manning the safety positions (barring any further position switches or additions to the 2010 class):

1. Troy Woolfolk – A senior in 2010, Woolfolk moved from cornerback this spring and is vying to start at FS in 2009.
2. Vladimir Emilien – A sophomore-to-be in 2010, Emilien is currently coming off of ACL surgery. He has moved quickly up the ranks during spring practice, but he is obviously lacking experience.3. Thomas Gordon – A redshirt-freshman-to-be in 2010, Gordon is considered a project and I think Robinson’s talent would help him leapfrog Gordon.4. Michael Williams – He’ll be a redshirt junior in 2010 and might be locking up the strong safety job this year.5. Isaiah Bell – I think Bell will stick as a safety, but many think he’s destined for a linebacker position. He’ll either be a redshirt freshman or a sophomore in 2010.Out of those players, I think Woolfolk and Williams would probably be our starting safeties in 2010. But after that, Woolfolk will be gone and the FS job would be up for grabs. There isn’t a ton of depth at safety, and that depth gets even thinner if Bell kicks down to LB. In my opinion, Robinson will be roaming centerfield from 2011 onward.(Please disregard the ugly T-shirt on the gentleman to Marvin’s left. I have it on good authority that said gentleman lost a bet.)