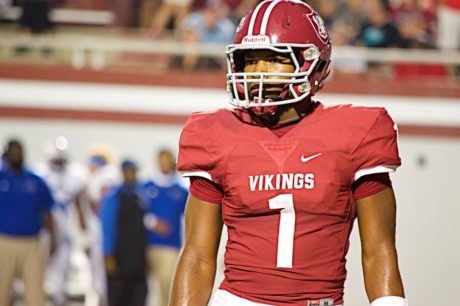 Valdosta (GA) Lowndes quarterback/running back/slot receiver/safety Michael Barrett committed to Michigan on Tuesday night. He chose the Wolverines over offers from Florida State, Georgia Tech, and Nebraska, among others.

Hit the jump for more on Barrett’s recruitment.

Michigan offered Barrett back in March of 2017, and then they also offered his teammate, offensive tackle Jalen Goss. Barrett initially looked like a longshot, and I expected his recruitment to blow up a little bit more. But the big-time teams didn’t come after him too hard, and he narrowed it down to Florida State, Georgia Tech, Michigan, and Nebraska. As a high school quarterback, some option teams – particularly GT and Nebraska – wanted him to be a quarterback in college. Goss went ahead and committed to FSU (where former Michigan offensive tackles coach Greg Frey now resides), while Barrett was rumored to be planning to announce a commitment – likely to Michigan – on his birthday. The birthday plan didn’t play out, but he eventually picked the Wolverines at halftime of his high school basketball team’s game on Tuesday night.

Barrett is 6’0″, 215 lbs., which means he’s thicker than the average high school six-footer. His lifting numbers – if they’re not falsely inflated like his forty time – are impressive, and he’s a strong runner. He uses the long-lost art of the stiff-arm, and he’s not afraid to lower his shoulder to punish defenders. He has good vision and some change-of-direction ability. As a quarterback, he has some pretty good mechanics and a strong, accurate arm with touch, but his height is an issue, so his throwing ability is mitigated for a team like Michigan.

On the negative side, Barrett lacks great long speed. He has good acceleration and runs hard, but he’s going to get tracked down from behind. Unless he breaks some tackles, there’s a cap on his big plays once defensive backs get in the hunt.

Overall, I like Barrett as a running back. I’ve heard rumors that he will be looked at as a slot receiver, and I don’t buy that. When’s the last time you saw a successful 6’0″, 215 lb. slot receiver in college? That’s a running back’s build. Michigan has also talked to him about being used as a Wildcat quarterback, which I love. The Wolverines could use some extra pizzazz on offense, and since their quarterbacks are largely stationary, it would be great to put together a sizable package for Barrett to run some zone reads, power reads, and maybe throw the ball on occasion. Barrett also reminds me of those tailbacks at Stanford who have had success under David Shaw and Jim Harbaugh in yesteryear (prior to Christian McCaffrey and Bryce Love).

Michigan now has 21 commitments in the 2018 class, and Barrett is the third running back (the spot where I project him), joining Hassan Haskins and Christian Turner. He is the fourth player from the Peach State to select Michigan in this cycle, following Turner, CB Myles Sims, and LB Otis Reese.