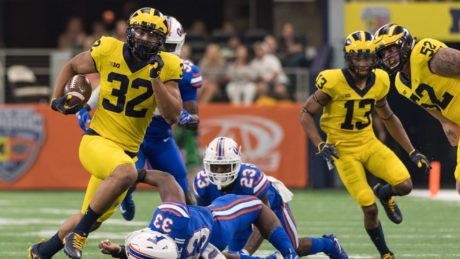 A thought on Grant Perry. I haven’t said much about the Perry situation, but I would say this about other teams, so I’ll say it about Michigan, too. I think it’s stupid to suspend players from all team activities in the off-season and then play them in game one. Perry should have been suspended from this game, and the dude spun the ball after his first catch, garnering a 15-yard unsportsmanlike conduct penalty. I’ll say this: If I were his coach, he would be in my doghouse right now.

Ty Isaac had himself a day. I don’t think anyone was more excited for a new start than Isaac. New running backs coach Jay Harbaugh seems to trust Isaac more than Tyrone Wheatley did, and Isaac responded by leading the team in rushing, despite having half as many carries as starter Chris Evans. Isaac ran 11 times for 114 yards (10.4 YPC), while Evans (22 carries, 78 yards, 3.5 YPC) and Karan Higdon (7 carries, 28 yards, 4.0 YPC) had some nice plays but struggled overall. I’m still a bit concerned about Isaac’s ball security after the ball came out when he hit the ground, but (knock on wood) he hasn’t fumbled since 2015.

I like the freshman receivers. Tarik Black had 2 catches for 83 yards, including a 46-yard touchdown. People said I wildly overshot his projected numbers for this season, but he’s on pace after one game to exceed my projections. There’s still a long way to go, but he connected on deep balls from both Speight and O’Korn. I think it’s safe to say that both quarterbacks like him, as well as the coaches. Meanwhile, Donovan Peoples-Jones wasn’t much of a factor on offense, but he averaged 8.0 yards/return on 5 punt returns and looks capable back there.

Has the offensive line improved? I think the line is better than last year by one iota, and only one. They played a solid run defense and averaged 4.4 yards/carry, and that’s with some very questionable decisions by the backs on a couple running plays. Higdon missed a wide-open hole on the draw handoff from O’Korn, and Evans missed a great potential cut on a counter play. Center Patrick Kugler had a couple snaps that went slightly off target, and right tackle Nolan Ulizio had a false start. They missed some blocks and didn’t get a ton of push, but we said that about last year’s unit, too.

The defense hasn’t missed much of a beat. I didn’t see much of a drop-off on defense from last year, but Noah Furbush as a defensive end is a work in progress. He got pushed around a little bit, even though he did end up with a defensive touchdown after falling on a Malik Zaire fumble. I also don’t love the cornerbacks right now. They suffered a loss when Keith Washington decided to transfer, and David Long just can’t seem to stay healthy for any stretch of time. Brandon Watson is going to get outrun by faster receivers, and Lavert Hill has talent but still needs experience. I think it can be a very good defensive unit if they luck out when it comes to health, but the quality depth isn’t there like it was last season.

All-maize uniforms. I didn’t like or dislike them. They were fine. At least the numbers and such were visible, unlike when Michigan played South Carolina during the Brady Hoke era.

Instant replay. There ought to be a way to use instant replay to fix the stupid referee error when Michigan scored a touchdown in the first quarter, only to be negated when the refs said fullback Khalid Hill was covered up and illegally released downfield. The guy who was covered up was Tyrone Wheatley, Jr., who stayed in to block. Those kinds of errors are inexcusable, and I don’t think I’ve ever seen a call like that. A guy in the booth should be able to buzz in and say, “You’re wrong.” That’s not a bang-bang thing like a holding penalty or a block in the back. If Michigan lost that game by a few points, there would be a whole world of trouble right now for the referees.