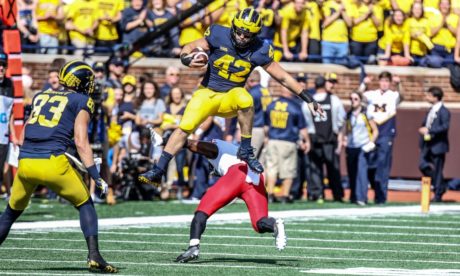 The passing game is coming around. Many Michigan fans have been upset with the passing game over the first several weeks of the season, but I think it’s starting to take off a little bit. This is around the same time that Jake Rudock started blowing up as a passer in 2015. Rudock was a transfer QB who needed some time to mesh with his teammates, and I think a similar thing is happening with Patterson. Maryland was #52 in pass defense and #39 in passing efficiency defense. They dropped to #68 and #67 in those categories, respectively, after Michigan quarterback Shea Patterson was 19/27 for 282 yards, 3 touchdowns, and 1 interception. Rudock really took off in game nine (337 yards, 2 TD against Rutgers) after hitting campus in the summer, while Patterson enrolled over the winter and got it going here in week six. Patterson did have a couple 3-touchdown games earlier in the year, but against weaker opponents.

Hello, Zach Gentry! Gentry had his best career game with 7 catches for 112 yards. Don’t look now, but halfway through the season, he’s leading the team in catches (20) and yards (306). Could this be the second season in a row that a tight end leads the team in receptions? (Sean McKeon led the team with 31 in 2017.) Gentry and Patterson seem to have developed some excellent chemistry, and there’s room to improve. Gentry has good speed and a large catch radius, but he misses some opportunities for additional yards after the catch.

We should officially be worried about the defensive line. Rashan Gary missed this game with an AC joint issue. (On a personal note, I had a similar issue at one time in my throwing shoulder, couldn’t throw for a month, and felt the remnants of the injury for several years afterward.) Gary battling 300-pounders on a regular basis is much more significant than anything I was doing at the time, so I can see why it would be bothersome. But Michael Dwumfour left this game with something that looked like an Achilles injury, and nose tackle Aubrey Solomon has missed the last several weeks after going through knee surgery. Then Carlo Kemp left this game late with an injury. Here are the scholarship defensive tackles still healthy for Michigan:

I wouldn’t be 100% disappointed if Michael Onwenu started getting some snaps on defense . . .

Who is Michigan’s best cornerback? Teams won’t test David Long. Brandon Watson is putting up the best stats, and he had a pick-six on Saturday. And a lot of people think Lavert Hill is the most talented of the bunch.

Write up a lifetime contract for Ben Mason. Bring back Khalid Hill, too. I just love to see 6’4″, 254 lb. dudes who run over people, jump over people, and just generally kick people’s behinds. He just looks like a dude who doesn’t take great pleasure in his own accomplishments on the field, but who feels a football field is where he’s supposed to be. He says he loves to hit people, but instead it almost seems like he would just be really sad if he couldn’t.

Was this a regression to the mean or were these makeup calls? A big deal was made this past week about the lack of holding calls against Michigan opponents over the past couple years. Magically, Maryland got called for a holding penalty. The Terrapins also got hit with two targeting penalties, when there had been some frustration regarding some targeting calls against Khaleke Hudson in recent weeks. I think Maryland’s targeting penalties were good, and I think the same about the ones against Hudson. If you commit the foul, it should be called. In hopes of preserving the game, I really do hope all these targeting penalties change the awareness of players who are in the process of tackling, blocking, etc. I don’t think Hudson had ill intentions when he targeted players in the last few weeks, but Maryland linebacker Tre Watson really seemed to be looking for a knockout shot against Donovan Peoples-Jones, so screw that guy.

Stop putting Brad Hawkins, Jr. on kickoff return. I complained about it last week, too. This week Hawkins took the first kickoff, dropped it, started to run, and then fell harmlessly to the ground. He gained 9 yards. The guy now has 5 career kickoff returns for 61 yards (12.2 yards/return). Get him off the field, please.

I love Matt Canada as a football mind. Maryland interim head coach Matt Canada uses a lot of formations, shifts, jet sweeps, and funky personnel choices to make things difficult for defenses. He has been the offensive coordinator at a bunch of places (Indiana, Northern Illinois, Pitt, North Carolina State, and LSU), and he usually seems to be able to make things happen. LSU wasn’t happy with the results there, and Maryland doesn’t have great personnel at wide receiver or tight end, but he does a good job with what he’s got. I think he’s trying to do a little too much with all the shifts at Maryland right now, but as a football coach, they’re fun to watch.