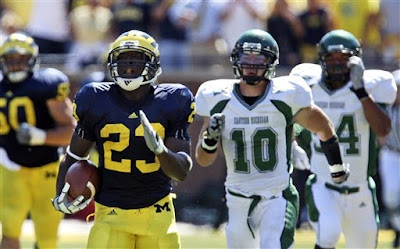 Hyperspeed: Engaged.
Yesterday’s final score represented what most Michigan fans expected. The score before and during halftime . . . not so much. Michigan jumped out to a whopping 3-0 lead before Eastern Michigan tied it at 3-3. They were tied again at 10-10 and went into halftime with Michigan leading, 24-17.
The star of the game was Carlos Brown, who ran only eight times in the first half but gained 163 yards in that span. Brown started the game in place of Brandon Minor, who’s still feeling the effects of a sprained ankle. It wasn’t apparent that Minor was injured, so as the game went along, I thought to myself, “Brandon Minor must be a horrible teammate and completely uncoachable, because he’s the best back on the team and they won’t play him.” In a way, I’m glad he was injured because I like him and I’m hoping those thoughts aren’t true.
Star quarterback Tate Forcier had a bit of a tough day. He started off hot but only completed one of his final six passes, finishing with 68 yards in the air. Eastern Michigan did a good job of hanging right with Michigan’s receivers, who couldn’t get open. That’s a bit scary if you’re a Michigan fan. The Wolverines should have far superior athleticism and talent on the perimeter, but that just didn’t seem to be the case.
However, the story for Michigan was that the Wolverine running backs were much faster and more athletic than Eastern Michigan’s linebackers and safeties. Michigan finished the game with 39 carries for 380 yards, a 9.7 yard average. In other words, Michigan could have run the ball every play and practically never faced a second down. Brown finished with 187 yards while Denard Robinson had 60, Michael Shaw had 53, Mike Cox had 31, and Minor had 21. Michigan finished the weekend ranked #3 in rushing offense.
Defensively, Michigan still has plenty of work to do. Defensive end Brandon Graham and nose tackle Mike Martin can both command double teams, but Michigan’s inside linebackers continue to be unable to fill the running lanes sufficiently. In fairness to the linebacking corps, starting WILL Jonas Mouton missed the game after being suspended for a punch he threw in the Notre Dame game. His backup, former walk-on Kevin Leach, led the team with 10 tackles, but neither he nor starting MIKE Obi Ezeh recorded a tackle for loss. Leach hustles and did a pretty good job of being in the right place, but he’s simply not the athlete Mouton is. Eastern Michigan was consistently able to run the ball in the first half, running 28 times for 128 yards. Defensive coordinator Greg Robinson and his coaches were able to make some halftime adjustments and limit EMU to 51 yards on 20 attempts in the second half, but really, there’s no excuse for the way the Eagles were able to run the ball in the first half, especially when you consider how little success they had in the passing game.
On the subject of defense, Michigan cornerback Boubacar Cissoko was the victim of one of the most egregious pass interference penalties you’ll ever see. Former Michigan cornerback Johnny Sears, who now plays for EMU, was inserted into the game as a wide receiver in the first half. Eastern Michigan quarterback Andy Schmitt tossed a fade route to Sears against Cissoko, who was basically running the route for Sears and had position downfield. As Cissoko was sprinting downfield in front of Sears and reached for the ball, Sears climbed up his back and tackled the sophomore corner. Somehow the referee blamed the collision on Cissoko, who should have just as much of a right to the football as the receiver. It was atrocious and I’m sure the official will be getting a reprimand this week, whether it’s public or private.
Offensive game ball goes to . . . Carlos Brown (1). Brown carried the ball 13 times for 187 yards (14.4 yard average) and 2 TDs. One was a 90-yarder in the second quarter. Brown’s lack of tackle-breaking ability is still frustrating. For evidence, see his 30 yard run in the first quarter where he’s taken down by the wave of Darth Vader’s hand. But his speed is scary.
Defensive game ball goes to . . . Craig Roh (1). Roh made 7 tackles, including 1 tackle for loss, and had the first interception of his career on a pass tipped by Ezeh. He also combined for a sack with defensive end Will Heininger, giving Roh 1.5 career sacks.
Let’s see less of this guy on offense . . . Denard Robinson (2). I’m going to take flak for this because Robinson ran the ball well (3 carries, 60 yards, 2 TDs). But he can’t throw the ball. He’s not ready to be an FBS quarterback right now, and that probably won’t change this year. He threw the ball four times and completed none to his teammates, but two were caught by Eastern Michigan defensive backs. One INT was an underthrown ball to Martavious Odoms, who was double-covered. The other was an underthrown and woefully inaccurate post route to Roy Roundtree. Robinson’s quarterback rating is currently . . . wait, what? . . . seriously? . . . uhhh . . . -6.10. Yes, that’s a negative sign.
Let’s see less of this guy on defense . . . eh, I’m not going to pick anyone this week. The inside linebackers didn’t play great, but the options there are limited. Leach was in there because Mouton punched someone and he led the team in tackles, so that’s pretty good for a walk-on. Ezeh was just okay, but J.B. Fitzgerald and Kenny Demens aren’t any better.