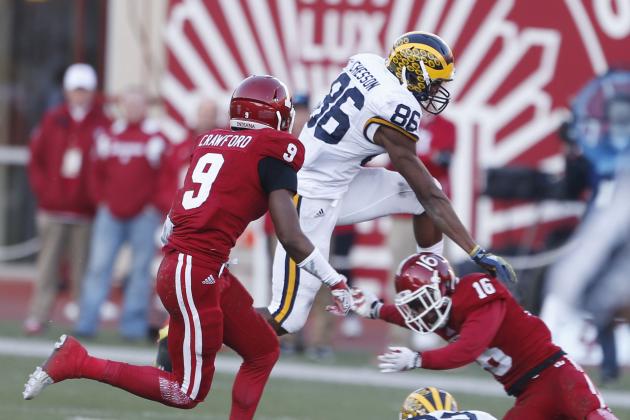 Jehu Chesson had a great day receiving, although this attempted leap did not end well.

I’m glad Jake Rudock transferred to Michigan. I’m not sure what Michigan’s record would be without Rudock, but they wouldn’t be 8-2. This one would have been a loss for sure. Rudock was 33/46 for 440 yards, 6 touchdowns, and 1 interception. On top of that, several times he bailed out Michigan with his legs and finished as Michigan’s leading rusher with 7 carries for 64 yards (9.1 yards/carry). He accounted for 504 total yards, which (I believe) is the second-most total yards in Michigan history, behind Devin Gardner’s 584 total yards against Indiana in 2013.

Michigan misses Ryan Glasgow . . . and will for a long time. Glasgow was in a sling this week, so we assumed he would not play against Indiana. But Jim Harbaugh revealed the worst news possible after the game, which is that he will probably be out for the season with a pectoral injury. When he left the Rutgers game, it looked like a pec or a shoulder issue. Now the Wolverines are very thin at the nose tackle position. Sophomore Bryan Mone broke his leg in August, and he was expected to be Glasgow’s primary backup. Now Michigan is down to its third-stringer (Maurice Hurst, Jr.) and some position-switchers. Hurst has been very good as a backup, but he seems to run out of gas and is a little bit undersized. Brady Pallante was receiving garbage time snaps earlier in the year, but Michigan inserted Tom Strobel instead, who was an extra offensive lineman earlier this season. He has been practicing on both sides of the ball, and I didn’t think he was terrible, considering the situation, but he’s obviously a step down from the Glasgow/Hurst rotation. I think Michigan needs to consider moving Willie Henry inside more, while other guys will have to step up outside. Indiana running back Jordan Howard ran 35 times for 238 yards (6.8 yards/carry) and 2 touchdowns.

Don’t get too cute. Before I expand on this, I should throw out the caveat that wrinkles and trick plays often look great when they work and terrible when they don’t. Hindsight is 20/20 blah blah blah. However, I thought Michigan was trying to be too creative early in the game when they tried to run laterally, throw laterally, etc. The freeze throwback screen to Jake Butt was a terrible idea. (Side note: Against my better judgment, our high school team has run that play several times with very little success.) Once the staff figured out those plays weren’t working, they just started throwing downfield. Magically, good things happened against a bad secondary. Indiana is not a team Michigan needs to trick. Indiana is a team who will trick themselves. Don’t give their front seven a chance to make plays – force their secondary guys into mistakes. Also, I think Michigan was trying to keep Jabrill Peppers fresh against Indiana’s hurry-up offense, but I mentioned last week that he needs to get the ball on some more conventional offensive plays. I would like to see him line up at tailback and run a toss sweep or a power play, line up in the slot and run a slant route, be a bubble route option on a zone read, etc.

I would swap Michigan’s OL and RB for Indiana’s. It’s not often that Michigan would probably say this, but Indiana’s offensive line and running back situation is better than Michigan’s. I’ve been saying for several years that Greg Frey was a very solid position coach during the Rich Rodriguez era at Michigan, and now he’s Kevin Wilson’s offensive line guru at Indiana. They consistently gashed Michigan up front, and they mostly kept QB Nate Sudfeld clean, too. Howard was stout, tough to bring down, fairly quick, and showed some good vision. He’s what Michigan fans wanted Derrick Green and De’Veon Smith to be, but Green lacks the natural athletic talent and Smith lacks the quickness and vision. Realistically, Michigan might have the least talented running backs in the entire Big Ten – and yes, I’m including runners from bottom-feeders Maryland, Purdue, Rutgers, and Illinois. I think Michigan needs to take the same approach to running back that they did with the quarterback position: recruit a bunch, look for transfers, and let them compete. In the 1990’s and early 2000’s, it seemed like Michigan was the Georgia of today. Michigan went from Powers to Wheatley to Biakabutuka to Thomas to Perry to Hart (except for an interceding year here or there), and Georgia has had Moreno, Crowell, Gurley, Chubb, Michel, etc. I might add Brandon Minor to the end of Michigan’s list, but he couldn’t stay healthy and didn’t have a very good team around him.

Indiana = records. Anytime Michigan plays Indiana, it seems like they set records or players have career games. In 2013 Devin Gardner threw for 503 yards, and Jeremy Gallon had 369 receiving yards. This year Jehu Chesson tied a school record with 4 receiving touchdowns and Jake Rudock set a school record with 6 touchdown passes. Indiana can never put together a solid unit on defense, and even when they have a decent player at one level, the other levels let them down. The Hoosiers had a decent front seven, but the cornerbacks and safeties were young and lacking awareness.

Rudock to Chesson. It took two-thirds of the season, but it seems like Jake Rudock and Jehu Chesson have finally synced up on the deep balls they kept missing on early in the year. Some people questioned whether Rudock could hit a deep ball, but I think it just took some time for Rudock to figure out how fast Chesson was and for Chesson to figure out how to adjust to Rudock’s throws. It didn’t take long in this game for them to hook up, as Chesson caught a 34-yarder to open Michigan’s scoring. Later in the game, he caught a dig route and housed it from 64 yards away. Chesson finished the game with 10 catches for 207 yards and 4 touchdowns. He also had some huge, clutch catches down the stretch, including a leaping 5-yard touchdown catch on 4th-and-goal at the end of regulation. Chesson’s previous high in receptions was 4 (twice earlier this year), and his previous high in yardage was an 82-yard day against Michigan State as a redshirt freshman in 2013. Over the past three weeks, he has 16 catches for 273 yards and 7 touchdowns.

What’s happening on special teams? Early in the year, Michigan’s special teams units were a revelation. Lately, not so much. It seems like the units were perfect until the Michigan State game, when everything came crumbling down. Actually, that seems to be a fairly large part of it. On the play when Michigan State bowled over long snapper Scott Sypniewski – whose snap was fairly low, anyway – punter Blake O’Neill dropped it, and the rest is history. But Sypniewski reportedly broke his thumb on the play, which has resulted in some questionable snaps over the past couple weeks. He rolled one back to O’Neill last week, and there was a bad snap on a field goal attempt against Indiana. It might be time to look at walk-on backup Andrew Robinson. Michigan had a pretty long run of good long snapper play before this year, but it’s a question mark right now. Furthermore, I don’t know if Michigan has the right personnel out on the field for special teams. They’re trying to work in some younger guys and give guys like Jabrill Peppers and Jehu Chesson a break, but those younger guys just don’t have the same talents. Add in the fact that Channing Stribling had Indiana punt returner Mitchell Paige wrapped up but failed to make the tackle, and you have a 51-yard punt return touchdown. I will also say that one issue I have with the spread punt is that teams usually employ big guys as the shield. That means that instead of having linebackers/safeties/running backs/fullbacks on the field, your last line of defense is often a 300-pounder. That was the case on Saturday, when the last two people with a shot at tackling Paige were offensive guard Ben Braden and defensive tackle Chris Wormley. Those guys don’t have a shot at corralling a tiny slot receiver, but it doesn’t get to that point if people like Stribling don’t whiff in the first place.

This was Delano Hill’s best game. I’ve been clamoring for Hill to be benched in favor of Dymonte Thomas for the past couple weeks, and it happened. Unfortunately, after Thomas made 3 early tackles, he was injured on special teams when Joe Kerridge was illegally blocked into him. In stepped Hill, who made 10 tackles and the game-clinching pass breakup. Maybe the benching was the kick in the pants Hill needed, because I thought he stepped up his game in the tackling department and made his second career pass breakup.

Targeting. The problem with all these rules in today’s game is that the game is moving too fast for officials to see and judge everything. Rudock got hit in the head while sliding in this game, his chinstrap came up over his nose, and he laid on the turf, and . . . nothing. Meanwhile, Joe Bolden got ejected for being blocked into Connor Cook against MSU. Officials don’t know how to see everything, and I honestly don’t see this targeting rule ever being able to be fairly and equally enforced. The only way “targeting” can ever be enforced well is if the rule says, “Targeting is any and all contact from a blocker/defender to the head/neck area.” Otherwise, it’s too big of a judgment call and varies from official to official, game to game. It’s applied as inconsistently as pass interference, except one is a 15-yard penalty and the other gets people ejected.

Indiana is a very intimidating place to play. At least, one would assume so based on Michigan’s penalty situation. The Wolverines were penalized 13 times for 72 yards. By the yardage total, obviously most of them were garden-variety 5-yarders. Erik Magnuson false started, Graham Glasgow had a false snap, Mo Ways couldn’t get set on one of them before A.J. Williams went in motion, Matt Godin jumped offsides twice, Hurst came across once, Henry came across once, etc. It was ridiculous. The worst was when linebacker Joe Bolden thought he timed up the snap count, raced full speed toward the A-gap, and then everyone looked at him like “WTF are you doing?” as the flags flew in. I keep hearing about his leadership and he’s a captain and everything, but he has some monster brain farts at times. When I watch him sometimes – the jumping around the stadium when he got kicked out against MSU, the “stake” incident at MSU last year, this boneheaded penalty – I almost see him as someone who hasn’t quite made the leap from high school to college. Ten games into his senior year, it’s time to grow up.

What does this mean for Penn State? Michigan’s going to have a tough time down the stretch. The easy games are behind them. Penn State can run the ball a little bit, and they have a stout defense. Michigan’s record looks pretty good right now at 8-2, but they could easily be 8-4 after another couple of weeks. The Wolverines need to figure out their defensive line issues, and they need to find a way to create plays in the running game.