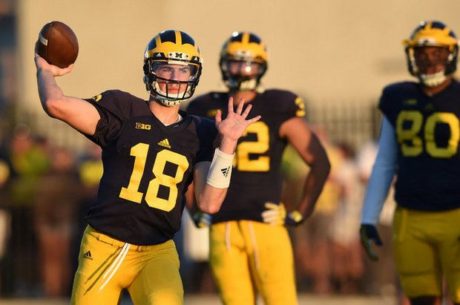 [This is the first official post from a new contributor to the site, umbig11. Thanks to him for his insights!  -Thunder]

I thought I would stop by and pass along some updates for all of you diehard Michigan football fans:

Let’s  start with a few minor bumps and bruises and an update on Grant Newsome. Spotted on the sidelines yesterday were Ja’Raymond Hall, Donovan Peoples-Jones, and Nolan Ulizio. None of them were in full pads. Lavert Hill and Drake Harris were also out. None of the injuries are serious and you could say that they are dinged up a bit. As for Grant, he was on crutches, but getting around pretty well. I would say that he is 50/50 for a fall return at this point.

The QB competition continues, but it looks like Wilton Speight is the clear leader in the clubhouse followed by John O’Korn and Brandon Peters. Collecting reps at QB #4 was Michael Sessa. For the avid followers I think it is common knowledge that Alex Malzone will graduate early and transfer after the spring.

The QB’s struggled a bit in yesterday’s practice. Lots of balls batted down or pressure caused them to tuck and run all too often. The defense is solid and I do not expect a drop off from last year.

There are some minor developments at RB that I would consider to be very positive. After yesterday’s practice I would say the depth chart looks like this: Evans, Walker, Isaac, and Higdon. Keep your erasers out as I think this could change many times until the second week of fall camp.

Evans looks solid and is in the neighborhood of 212-215 lbs. Isaac ripped off a 75-yard TD right up the gut yesterday much to the delight of Jim Harbaugh! The inside running game between the tackles appears to be Higdon and Isaac. Furthermore, it looks like the light has come on for Walker. He is performing well this spring.

As for the receivers, all I can say is wow! What a talented bunch. Early leaders are Crawford, Harris, McDoom, and Bunting. Gentry had one hell of a practice yesterday and the previous Sunday. He creates a mismatch and he has performed well from the TE Flex. He had several catches yesterday.

DPJ is special! I will say it is again, he is a Frisbee catching dog! He will move up the charts once he is healthy and likely start once he learns the offense. Nate Johnson has played well inside while backing up McDoom. I would not expect Perry to return at this point due to legal troubles. Black has shown enough to see the field.

Ah, the OL? This will be a work in progress. Right now you have Cole, Bredeson, Kugler, Onwenu, and Juwann Bushell-Beatty. Lots of moving parts. Ruiz and Runyan are making noise and will be solid contributors. Ruiz at C and G and Runyan at G and T. We need to find 2-3 more and a couple may arrive in the fall. Ruiz is very special and he will play early, if not crack the first five by conference play.

I think I will cut this short and cover the defense later today or in the morning. That group is going to be special despite the losses to graduation and the NFL.