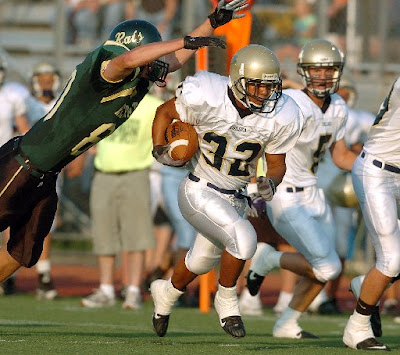 The following is a list of seniors who are expected to attend Michigan’s one-day, invitation-only camp today. Don’t be surprised if there are some more fireworks in the near future. (Highlighted players are confirmed attendees.)

Easterly is a guy who doesn’t have a Michigan offer right now. He just committed to Illinois, so despite the pipeline from Cass Tech to Michigan recently, it’s unlikely that Easterly would immediately decommit in favor of the Wolverines. But if he does earn an offer, Michigan could be a factor down the road. I like Easterly and I think he could play Greg Robinson’s “Spin” OLB/S hybrid or pack on a few pounds and play OLB.

Hankins also doesn’t have an offer, but has repeatedly implied that he would jump on board if offered. The problem in the past has been his conditioning. He was upwards of 326 pounds and that had Michigan’s coaches concerned, but supposedly, he’s down to about 310 right now. If he can maintain that weight and show the necessary athleticism and hustle the Michigan coaches desire, he could earn an offer today.

Hill is another player who would probably commit on the spot if he earns an offer. As much as it would be nice to add a guy who loves Michigan so much, I don’t see an offer coming forth at this time. There are more talented guys on Michigan’s radar, and recently it seems that Tony Drake is more likely to be a RB than a slot. This class will probably only take three running backs, and if those three RBs are Hopkins, Drake, and Hill, that would be underwhelming. Michigan has strong chances with Eduardo Clements, Austin White, and Cassius McDowell, all of whom are more desirable than Hill, in my opinion (and in the coaches’ opinions, since those guys have already earned offers).

The Lindsey twins from Inkster might be MAC-level talents, and an offer to one would probably mean an offer to both. They would probably both jump at the chance to play at Michigan, which would fill up our safety class immediately with middling talent. They might earn offers late in the process, but not today.

Schneider is the teammate of Michigan commit Christian Pace and could get offered if he shows well. It seems that every TE Michigan offers commits very quickly . . . to another school. So there’s a shortage of available TEs with Michigan offers out there.