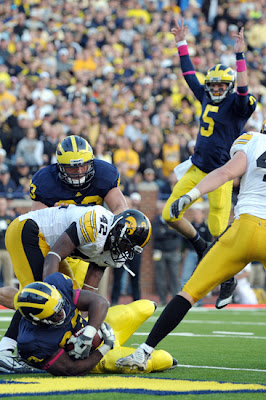 Let’s see more of this guy on offense . . . Tate Forcier.  I’m not advocating for Forcier to be the starter or take away Denard Robinson’s playing time.  Robinson has been excellent for the most part.  But this issue popped up in the Michigan State loss, and again this week against Iowa: Forcier is the better overall passer.  If and when Michigan is down by a few scores late, I think Forcier offers a better chance of leading a comeback via the pass.  He’s better at reading defenses and understands the passing concepts better.  And to be completely honest, he looks more comfortable dropping back to pass than Robinson.  Forcier is like a solid long reliever.  If the starter isn’t getting it done, #5 might be able to give you a few innings of good pitching and a chance to get back in it.  The Wolverines only had 7 points up until the point in the middle of the third quarter when Robinson got hurt.  In about 1.5 quarters, the Forcier-led Michigan squad put up 21 points (1 rushing TD by Stephen Hopkins, 1 passing TD from Forcier to Junior Hemingway, and 1 rushing TD by Forcier himself).

Let’s see less of this guy on offense . . . Vincent Smith.  Please.  He averaged 3.9 yards a carry and had a key fumble on Iowa’s 14-yard line.  There are better options, and Smith can see some time in passing situations or at slot receiver.

Let’s see more of this guy on defense . . . Kenny Demens.  Demens seems to be an upgrade at the middle linebacker position, at least against a power running team like Iowa.  He plays downhill more than Ezeh and offers more pop.  At this point in the season, Michigan is #82 in scoring defense and #105 in total defense.  Any change at all just might be worth it.

Let’s see less of this guy on defense . . . Adam Patterson.  It’s not because I have anything against Patterson himself.  It’s just that Mike Martin, the starting nose tackle, is perhaps the most valuable player on the defense right now.  Michigan’s pass rush was virtually non-existent in the Iowa game, and the penetration up the middle that has at least slowed down running games this season was absent with Martin out of the game.  Hopefully the ankle injury caused by MSU’s illegal chop block will heal quickly, because Patterson isn’t a nose tackle.  I’m not quite sure why the coaches wouldn’t put Renaldo Sagesse at NT instead of Patterson, but regardless, a 275 lb. nose tackle is begging for trouble.

MVP of the Iowa game . . . Tate Forcier.  He gave Michigan a spark when they needed it most.  He still showed some of the poor ballhandling and decision-making immaturity that he had last year, but he still finished 17/26 for 239 yards and 2 touchdowns (1 rushing, 1 passing) and led another scoring drive.  He needs to tuck the ball away when scrambling and make better decisions throwing the ball, but 21 points in 1.5 quarters is pretty productive.