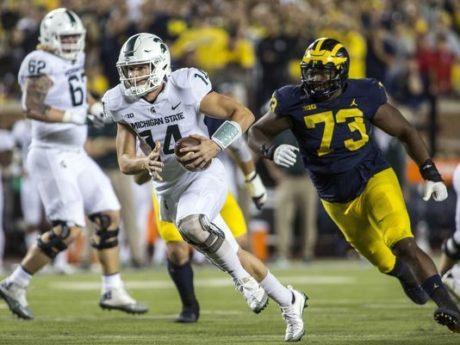 Let’s see more of this guy on offense . . . Maurice Ways. Michigan tried a couple fade routes on Saturday, though they were ill fated. One was to Sean McKeon – which isn’t a terrible idea – and another was to Eddie McDoom, which is a little more suspect. Ways was a high school basketball player who didn’t concentrate on football until he realized that it’s pretty tough to succeed in basketball if you’re “only” a 6’3″ wing. He might be a better fade option than McDoom or McKeon, who have not shown an ability yet to go up and get the ball.

Let’s see less of this guy on offense . . . ball carriers carrying the ball in the wrong hand. There are two schools of thought when it comes to which hand to carry the ball. The first is to carry the ball in the dominant hand, since that hand is the strongest and most coordinated. The second is to carry the ball in the outside hand. I’m a proponent of the second. If you practice carrying the ball high and tight, you can do it with either hand. It seems that Jay Harbaugh likes the first kind, but it’s cost Michigan a couple times this season. Along with Ty Isaac’s momentum-changing fumble, the other two primary tailbacks have also put the ball on the ground this season. If the ball had been in his outside hand, Joe Bachie would not have been able to reach it.

Let’s see more of this guy on defense . . . Bryan Mone. Mone might not be the best choice against some teams, but against Michigan State, he had one of his best games at Michigan. Along with last year’s Ohio State game, Mone can be a force inside against the right teams. He had 2 tackles and 0.5 tackles for loss in this one, but he was eating up blockers to free up other guys, too.

Let’s see less of this guy on defense . . . nobody. This is an excellent unit.

Let’s see more of this guy on special teams . . . Ambry Thomas. Kekoa Crawford returned 1 kickoff for his customary 14-yard gain, promptly getting tackled by the first guy who bothered to get downfield. Meanwhile, Thomas entered the game and immediately got a 30-yard return. That’s a difference of about 1.5 first downs you don’t have to get in order to score points.

Let’s see less of this guy on special teams . . . Kekoa Crawford. Crawford has yet to average more than 19 yards per return in any of the first five games, and a few of those games were contests where Michigan had a decided athletic advantage overall. Going back to when Michigan had just an average kickoff returner – Dennis Norfleet in 2014 – he had a 36-yarder against Appalachian State, a 42-yarder against Miami-OH, a 22-yarder against Utah, etc.

Play of the game . . . Lavert Hill’s pass breakups. Hill had 3 pass breakups overall, and they were all quality plays. Perhaps the biggest was when he was playing the flat in Cover 2 and recovered on an intermediate pass to make up for the safety, who was in the process of busting a coverage. A stronger throw might have whistled the ball in there, but it was still a very good play by a young corner.

Player of the game . . . Maurice Hurst, Jr. Hurst seemed to personally take over the game in the fourth quarter. He ended the contest with 8 tackles and 2.5 tackles for loss, and he was constantly beating Michigan State’s line off the ball and getting penetration. His production had been limited earlier in the season in Michigan’d 3-3-5 look, but as a 3-technique, he’s one of the best in the country.