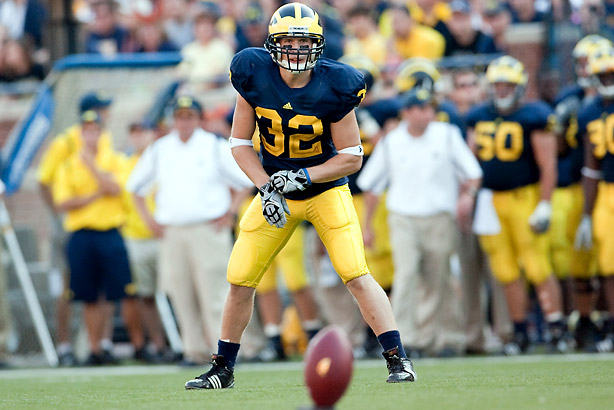 Let’s see more of this guy on offense . . . Denard Robinson.  What?  Yeah, you read that correctly.  I hope that in years to come, Robinson can stay healthier than he did this year.  Earlier in the year, I wanted Robinson to run the ball less.  On Saturday, I wanted him to run the ball a lot.  Well, he ran 18 times for 105 yards, but dislocated a couple fingers on his left hand and missed most of the second half.  Sometimes that’s the way the cookie crumbles, I guess.

Let’s see less of this guy on offense . . . Butterfingers Roundtree.  I’m not sure what happened to one of my favorite players on this year’s team, Roy Roundtree.  He was perhaps the most dependable receiver on the team over about the first nine games of the season, but dropped a couple passes in games 10 and 11, then dropped five passes (I think) against Ohio State.  He had several chances to make critical catches and couldn’t seem to keep his focus for some reason.

Let’s see more of this guy on defense . . . Courtney Avery.  The presence of Avery might allow Troy Woolfolk to return to free safety in 2011.  I really like what I’ve seen from him in the second half of this season.  He needs to get stronger and work on his tackling, but I look forward to seeing him develop over the next few years.

Let’s see less of this guy on defense . . . Greg Robinson.  Bye, Coach Robinson.  I hope you land on your feet somewhere.  A lot of people are mad at you, but I kind of feel sorry for you.  Maybe at your next destination, the head coach won’t force you to run a style of defense that you don’t understand.

MVP of the Ohio State game . . . Jordan Kovacs.  I know I mentioned yesterday that I wish Kovacs had tossed the ball to a more athletic teammate after he intercepted a pass at the end of the second quarter, but Kovacs played a solid game.  He ended the day with 17 tackles and the interception.  Good for him.