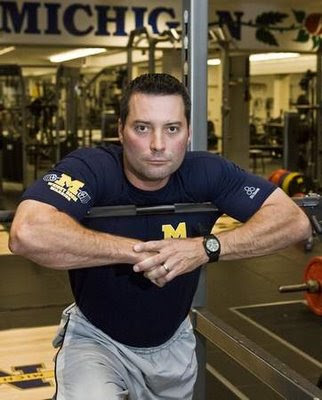 Almost more so than the hiring of Rich Rodriguez in December 2007, the arrival of West Virginia’s strength and conditioning coach, Mike Barwis, excited Michigan football fanatics. Rumors abounded that Barwis was an ex-cage fighter, owned pet wolves, and drank battery acid protein drinks. The speed of West Virginia’s football team and the success of its undersized offensive line had the Michigan faithful believing that Barwis could turn middling recruits into supermen and good recruits into gods and really good recruits into Barry Sanders.

While Michigan looked faster on the field in 2008, Barwis’s program obviously didn’t translate into victories. And to be fair, experts say that it takes a full year for a new program to really take effect. So while Brandon Minor and Greg Mathews, in particular, seemed to gain a step in 2008, the coming season is perhaps when we will see the results of Barwis’s newfangled approach to strength and conditioning.

So with the 2009 NFL Combine wrapping up last week, I thought I’d take a look at Michigan’s invitees and see if Barwis deserves the hype.

Terrance Taylor – DT
As a high schooler, Taylor reportedly ran a 4.85 forty-yard dash as a 6′, 285 lb. defensive tackle. Considering that many high school times are inflated, let’s add one-tenth of a second to that time and call it a 4.95. At 6′ and 306 lbs. this past weekend, Taylor ran a 5.24 forty-yard dash. Taylor supposedly benched 185 lbs. a total of 32 times coming out of high school, a max factor of 381 lbs. This weekend Taylor put up 225 lbs. a total of 37 times (max factor: 500), second in the Combine only to Louis Vazquez from Texas Tech.

Morgan Trent – CB
Trent is more difficult to judge. In high school he supposedly ran a 4.4 forty-yard dash, which doesn’t seem infeasible, considering he holds the Michigan state record in the indoor sixty-yard dash and the indoor 200-meter dash. Reports out of Indianapolis have him running anywhere between a 4.42 and a 4.53 at the Combine, so he probably didn’t get any slower – but he probably didn’t get much faster, either. Speed seems to be a wash with Trent. He did, however, bench 225 lbs. twenty-three times at the Combine, which tied him for fourth amongst cornerbacks and seventh of all defensive backs. At 6’1″ and 193 lbs., Trent’s weight didn’t fluctuate much since Barwis’s arrival, although he did seem sturdier and made some excellent hits in the 2008 season.

Sean Griffin – LS
Griffin’s numbers at the Combine probably affect him less than the other three. He checked in at 6’2″ and 242 lbs. As an excellent college long snapper, his snaps aren’t the issue. The biggest question about Griffin will be his strength and speed for getting down the field and making tackles. Long snappers are often the first ones off the line to release and start covering punts downfield. Griffin turned in a 5.14 forty yard dash at the Combine, which is not a particularly good number for someone who weighs just over 240, whether he’s a long snapper or not. It’s somewhat curious that Griffin even got invited to the Combine, considering that he never played a down at any other position.

Conclusion
The stories about Barwis improving strength seem to hold some truth. Morgan Trent and Terrance Taylor both did very well in the bench press. Regarding speed, Trent’s 4.53 forty time was somewhat disappointing, considering he has generally been considered one of the two or three fastest guys on the team. However, he did better than expected in the agility drills, so perhaps he’s faster than a 4.53 and that was just an aberration.

These players – in addition to safeties Brandon Harrison and Charles Stewart, linebacker John Thompson, defensive tackle Will Johnson, and tight ends Mike Massey and Carson Butler – will have a chance to improve these numbers at Michigan’s Pro Day on March 13.