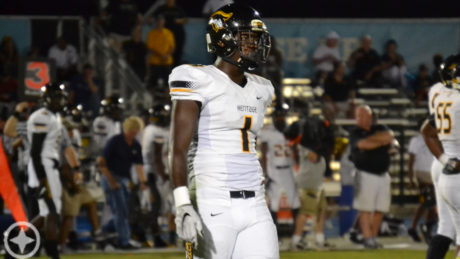 Hit the jump for more on Eubanks’s commitment.

Michigan offered Eubanks in March of 2015. He was thought to be staying down south for college, so he was a little bit off of fans’ radar for a long while. Michigan’s staff rekindled the relationship in December, and though an official visit did not happen immediately, it was rescheduled for January. Florida was thought to be the front-runner, but the official visit to Michigan this week convinced him to pull the trigger. He has canceled his planned Florida visit for the final weekend, so he is expected to sign with Michigan next Wednesday.

In my “If I had my Druthers” post earlier this week (LINK), I listed Eubanks as my #5 most wanted tight end out of 5 prospects. He has an athletic frame, although he does not look close to the 6’6″, 230 lbs. at which he listed on 247 Sports. If I were guessing, I would put him at 6’4″, 215 lbs. He has pretty good straight-line speed, both on the track and on the field. He has pretty good feet and can be a slippery runner. As a blocker, he’s not afraid to lower his shoulder once in a while and lay into a defender.

The reason he was #5 on my list has to do mostly with the stuff that he can control (effort, body language, discipline, etc.), not the stuff he can’t (size, speed, etc.). Lo0king at highlights – which are supposed to show you at your best – he gets involved in extracurricular stuff during and after the play. He stands over players who end up on the ground. At one point approximately 2:50 into the video below, he gives a so-so effort at blocking, holds a little bit, and lets his man go; while the guy he’s supposed to be blocking slips off to make the tackle, Eubanks struts toward the sideline while his teammate fights for extra yardage. Eubanks is a body-catcher, so he doesn’t get his hands away from his body. When he settles down into a hitch route (apparently one of the very few routes his team knows), he drifts rather than coming back to the ball. There are at least two plays in which he blocks defenders in the back and deserves a penalty. On several plays he blocks without bending, lowering his hips, and moving his feet well. He does not appear to fight very hard for extra yardage after the catch.

On the one hand, Jim Harbaugh knows what he wants in a player and has a very good track record of developing tight ends. On the other hand, there are players like Brian Cole, Logan Tuley-Tillman, etc. who have red flags and bomb out of the program for one reason or another. I am not fond of what I see on Nick Eubanks’s film. I guess I’ll leave this part of the discussion at that.

As far as things go for Michigan’s future on the field, Eubanks looks like an H-back with his size and skill set. He is a little bit light to be a true tight end, and I don’t know that he has the frame to develop into a traditional 6’6″, 250 lb. tight end. I imagine he will assume a role like Khalid Hill, where he will go in motion, line up as a wing, bump out to the slot, etc. I am reminded a bit of former North Carolina Tarheel and current Detroit Lion tight end Eric Ebron, although I think Ebron is more athletic. Eubanks would have a chance to play early, if only because Jim Harbaugh likes to use as many tight ends as legally allowed.

Eubanks likely takes the spot that was looking like it would go to Nixa (MO) Nixa tight end Chase Allen. Allen announces his commitment tomorrow, and he will probably pick Iowa State. (Allen was #3 on my list.) It’s still a possibility that Michigan will add Concord (CA) De La Salle tight end Devin Asiasi (who was #1 on my preference list) next week, someone who is reportedly “a take” regardless of other developing situations. They would join Sean McKeon, a tight end who is already enrolled early for winter semester.