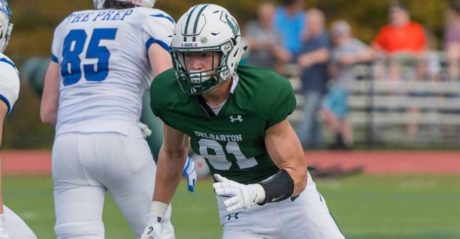 San Antonio (TX) Christian tight end Nick Patterson committed to Michigan on Sunday night. He chose the Wolverines over offers from FAU, FIU, Memphis, and UCF, among others.

Hit the jump for more on Patterson’s commitment.

Patterson is the younger brother of Michigan quarterback Shea Patterson. He was offered over the summer. The story goes that during an interview, he was listing his offers while Shea was standing there. Shea said “You forgot one” and then filled him in that Michigan wanted to offer.

Patterson is a pretty smooth receiving tight end. I haven’t seen much film on him, other than what’s below, where he’s lined up as a slot receiver. He’s quick in and out of his breaks, and he has pretty good running instincts. It’s hard to glean too much from what we can see here.

Michigan now has four commits in the 2020 class, including Patterson, wide receiver Kalil Branham, cornerback Andre Seldon, and defensive tackle Denver Warren. Michigan is scheduled to lose Zach Gentry and Sean McKeon after the 2019 season, if they stay that long, so there will be an opening for tight ends in 2020.

TTB Rating: I will not be giving TTB Ratings until the 2019 class wraps