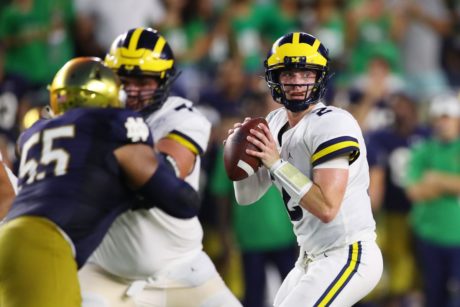 Hit the jump for a bunch of other depressing takeaways.

One of my biggest fears appears to have been realized. Offensively, here’s what I have seen happen at Michigan:

I see a square peg trying to fit in a round hole, and the carpenter can’t figure out how to shave the edges to make it all fit together. At this point I believe it’s going to be another long year.

The lethargy has started to spread. I have a hard time getting excited about this team and this offense based on this game. It’s only one game, of course, but the lack of imagination at this point can’t be blamed on Tim Drevno or Wilton Speight at this point. Michigan has a spread-style quarterback with an offensive line coach who has coached a smashmouth spread team. Unfortunately, the play calling was from the Lloyd Carr era of Michigan football.

The ghost of Nolan Ulizio showed up wearing a “Runyan” jersey. I’m not sure how Runyan locked down a starting tackle job early, which was the rumor coming out of spring and summer. It’s reminiscent of Ulizio beginning last year as the starter at right tackle, which was an abomination. Runyan fared just as poorly on Shea Patterson’s blind side. He’s a decent athlete, but he’s too short and doesn’t have the experience or understanding to be a starting left tackle in the Big Ten. The fact that the University of Michigan hasn’t been able to field a true left tackle for the past 2.5 years is pretty damning. Ever since prototype Grant Newsome got hurt after just a half-season of starting, Michigan has rolled out a guard (Ben Braden), a center (Mason Cole), and another guard (Runyan) at left tackle. That experiment needs to end ASAP.

Michigan was not mentally prepared for this game. Josh Metellus got ejected for targeting. Tyree Kinnel and Metellus’s backup, Brad Hawkins, got beaten deep. Chase Winovich hit the QB late on an incomplete pass that should have made it 4th down. Will Hart botched a hold on a field goal attempt after that holding job was manned by Garrett Moores the past couple seasons. Did you ever think you would miss a holder? I miss Moores. When it came time for a two-minute offense late in the game, Michigan was huddling. Then they didn’t huddle but the tempo was so slow that maybe they should have. Mistakes happen in every game, but why didn’t Notre Dame have similar issues in game one? Maybe it’s time for us to admit that Jim Harbaugh isn’t the coach we all want him to be.

New position coach, same mental mistakes. I’m still not impressed with Metellus, and I’ll leave it at that for now. Backup Brad Hawkins, Jr. was beaten deep shortly after entering the game. Tyree Kinnel whiffed on a tackle attempt in the first quarter, using terrible technique along the way. Safety isn’t an easy position to play, but Michigan doesn’t seem to get good ones very often. Chris Partridge has his work cut out for him with these guys.

There are no playmakers on offense. Most teams seem to recruit that one guy who’s position-less but can do different things in space. Is he a running back or a wide receiver or a defensive back? Nobody knows, but he’s fast. Michigan doesn’t have that guy, and I truly believe Eddie McDoom was as close to having that role as anyone on Michigan’s roster before he transferred to South Florida. Now the closest anyone is to that role is Chris Evans, but Evans doesn’t have great long speed and spends a lot of time lined up in the backfield as the #2 running back. Michigan needs an X-factor type of player. Jabrill Peppers was that guy a couple years ago. Not every X-factor is a future 1st round pick as a safety and can go both ways, but there are lots of players out there in college football who can be big-play guys on offense only. For whatever reason, Michigan is one of the few teams that doesn’t have someone like that.

The defensive tackle rotation was odd. Bryan Mone and Lawrence Marshall started at defensive tackle, while Mike Dwumfour and Aubrey Solomon came off the bench. Mone isn’t as good as Solomon, and who knows about Dwumfour? All we’ve heard is that Dwumfour is the second coming of Maurice Hurst, Jr., but the only time he did anything against Notre Dame was when the center didn’t block him so he had a free shot at the running back in the backfield.

Did the new S&C coach make a difference? The only play I saw that showed a difference was Ambry Thomas’s 99-yard kickoff return for a touchdown. What did I see? Last year I think Thomas would have been taken to the ground by a couple of those arm tackles. This year he ran through them and when he busted loose again, he took it to the house.